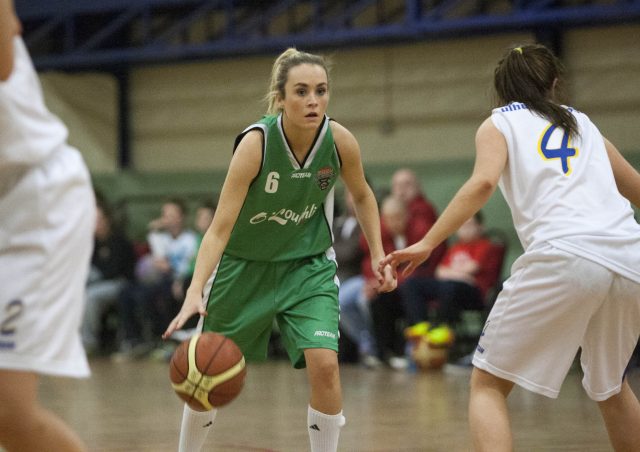 Maeve O’Sullivan is the subject of this week’s ‘My Club and I’ interview. Maeve is a player, a coach and PRO with the Portlaoise Panthers Basketball Club.

Can you remember the first time you went to play with the club?
I made my first competitive debut for the the Portlaoise senior team when I was 16 years of age (there was no underage setup in the club at that point) and we were competing at National League Division 1 level.

When I went to college I played with DCU but returned to Portlaoise in 2006 and have been playing with the Portlaoise Panthers ever since.

Tell us a bit about the club?
The club, although steeped in history, is relatively young in its current form. The juvenile and senior setups were run as separate entities for numerous years until 2008 when all teams were brought together under the umbrella of Portlaoise Panthers Basketball Club.

We now cater for all age groups and genders from our academy, 4-8 year olds, right up to senior level. Our teams are entered in Midland Leagues, Kilkenny Leagues, Dublin Leagues and our senior women compete at the highest level in Ireland, the Super League. We are a very close knit club and we really do emulate the ‘club is family’ motto’.

What are the facilities like?
We are based out of St Mary’s Hall in Portlaoise and are self funded, so year on year we try to improve our equipment and ensure we are providing the best standards to all of our members.

Can you remember your first game for the seniors?
Yes, I vividly remember it! I wasn’t on the senior team at this point, I was too young, and every Easter weekend both the men and women’s team participated in the Longford Falcons Tournament.

The girls team were short of players and so I got the call up to travel with them for the weekend.

I was initially flattered as a 15-year-old to even be considered but then the anticipation and nervousness kicked in! I played five games for them that weekend and was taken under the wing of all the players. The following September I made my competitive debut.

What is your favourite memory while being involved?
My favourite memory has to be winning the National Cup in 2014. As a youngster I used to travel up to the arena on the last weekend in January to watch all the best players in the country perform on the national stage.

The Americans and the Irish players alike fascinated me; I was in awe of them and lifelong goal was to play in the arena in a National Cup Final.

My dream became reality in the 2013/14 season when we faced Tralee, the three-time league champions, in the final and were very much up against it.

The whole club donned their green colours and came out in spectacular numbers to lend their support. Winning the Cup was amazing in itself but winning it with my sister as my teammate, my brother as my coach and with my home team, supported by my extended family – the club, truly topped off a remarkable win.

Regaining the Cup in 2015 after a comprehensive win over Dynamo Oblates was the icing on the cake but, getting my hands on that cup for the first time was my favourite memory!

Did you enjoy much success in the underage grades?
Unfortunately when I was younger we did not have the same opportunities offered to the underage members of our club today as there was no juvenile setup in Portlaoise or indeed across the Midlands.

We played in school, under the guidance of Pat Critchley, and were hugely successful there but that was the extent of it.

Who did you look up to in the club when you were younger?
I would have to say my sister Catherine O’Sullivan was the player I looked up to when I was younger. She was, and still is, a phenomenal player and leader.

She played Super League with Meteors in Dublin for 12 years before coming back to play with the Panthers. I remember travelling the length and breadth of the country watching her play and always aspired to be just like her (and as accurate from the three point line!). It’s a privilege to play with her now.

What young player in your club would you say is one to watch out for?
We have some serious talent coming through our underage structure right now so I can’t narrow it down to one! Claire Melia is the best underage player in the entire country who has accumulated so many accolades already in her short basketballing career and has numerous American college scouts banging down her door!

Maeve Phelan is also making waves in Irish basketball and, along with Claire, has made the step up to Super League basketball this year and is definitely one to watch for the future.

The boys side of the club also have many shining stars; Oisin Rice, Rian O’Connell and Dylan Phelan, through their selection on Irish International development panels, have proved they can compete with the best in Irish basketball. It is such a promising time for our club.

If you could do anything to improve the club, what would it be?
I would love to win the lotto and build a sports complex dedicated solely to basketball and make it the home of the Portlaoise Panthers Basketball Club.

We have to compete with other sports for hall time in St Mary’s Hall and with our numbers increasing year on year, it is difficult to offer sufficient training time to each team. Our own complex would definitely offer each player and team the opportunity to improve thus making the club more successful.

What’s the best and worst thing about being involved?
The best thing about being involved as a player is the comraderie and the feeling of being a part of a team; as a coach, it’s the ability to offer players a platform to improve and harness a passion for the game and as a member of the committee, is aiding the development of the sport that I love across Portlaoise and Laois.