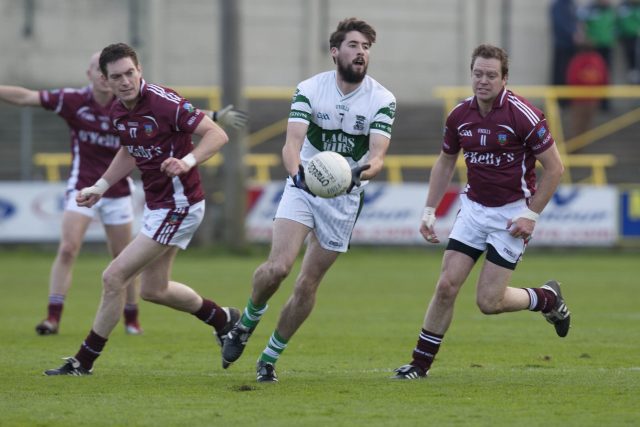 Portlaoise made it three straight wins in the ACFL Division 1A as a strong second half showing was enough to get past the challenge of The Heath tonight.

Malachy McNulty’s side ran out six point winners in the end but that margin of victory flattered them somewhat as The Heath pressed them hard until the midpoint of the second half.

Portlaoise made a great start and kicked the first three points. Scott Lawless kicked a brace while centre forward Benny Carroll popped up with the other as the visitors settled into an early lead.

Eoin Delaney got The Heath off the mark from a free but Portlaoise continued to find their range as points from John Kavanagh and Paul Cahillane moved them four clear at the midpoint of the half.

However, Delaney responded with his second free and then played a big part in the game’s first goal. His low ball split the Portlaoise defence and ran for Andrew Booth who, as keeper Michael Nolan advanced, squared the ball to Mark Dunne who side footed into the empty net.

Lawless responded for Portlaoise but The Heath kicked the last two points of the half to take a 1-4 to 0-6 lead into the break thanks to Mark Dunne and Eoin Delaney.

Portlaoise introduced Jack Brown at half time and he was amongst the scorers as they wiped out The Heath’s lead thanks to further efforts from Scott Lawless and Conor Boyle.

Eoin Delaney narrowed the gap to two as we entered the final quarter but Portlaoise scored two goals before the 50th minute to make the game safe.

The first came when David Holland charged up field from corner back and centred to Paddy Downey who fisted the ball to the net.

While the second came thanks to some quick thinking from Paul Cahillane who’s quickly taken free kick found Scott Lawless and he deftly flicked the ball beyond the advancing Joe Walshe.

To their credit, The Heath kept plugging away and they got the last three points of the encounter thanks to Delaney, James Phelan and Podge Whelan to leave six between them at the finish.

This result sees Portlaoise rise to third in the table – just a point behind O’Dempsey’s and three off St Joseph’s who occupy top spot after eight games.