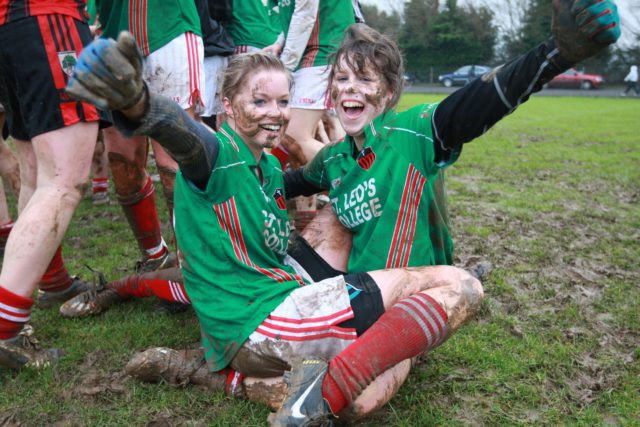 St Leo’s were are a real powerhouse in senior ladies football between the years of 2006 and 2011, winning three of the four All-Ireland finals that they reached.

St Leo’s had seven Laois players on the starting team and one came off the bench to take part the final. The game was played in Timahoe, in a shockingly wet and mucky day but that didn’t stop St Leo’s cruising to a 16-point victory.

The Laois players involved were Grace Miller, Andrea Burke and Aisling Wall who played for Killeen at the time, Jane Moore, Rhona Julian and Katie Dempsey who played for Ballylinan, as well as Sinead Doogue from Graiguecullen and Emer Delaney from Crettyard.

The star performer on the day was Sinead Doogue, who grabbed seven points, while Katie Dempsey got two and substitute Emer Delaney popped over a point.

St Leo’s held an eight-point lead at half-time, 1-8 to 0-3, and the mountain was huge for St Mary’s of Edenderry to climb and they failed to even mount an assault, having played the whole second half without scoring.

That impressive stat for Leo’s had to be attributed to the likes of Grace Miller and Jane Moore who were dogged in the full-back line. Rhona Julian and Andrea Burke added to the attack while also being solid in defense, and Aisling Wall worked tirelessly on the wing to help push the Carlow side to victory.

That was to be the St Leo’s pinnacle in that season, as they ended up on the losing side in the All-Ireland semi. But success was only around the corner for St Leo’s as they were crowned All-Ireland champions in 2010 and 2011.