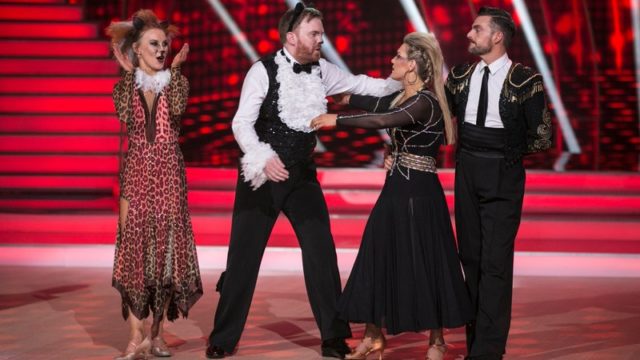 O’Shea and fellow contestant Erin McGregor found themselves in the first dance-off of the series after receiving the lowest number of public votes.

“I don’t regret any of the dances, or costumes or anything I did on the show,” he said afterwards.

“If it was called ‘Having the Craic with The Stars’ I would have won it. It has been the most amazing experience, but I was never going to win. It was like trying to get a bullock to win the Grand National.”

According to judge Julien Benson it was too much “belly-belly bum-bum and not enough tuck-tuck suck-suck”.

To get into character, Bernard dressed as a cat and carried oin despite suffering from a sore knee.  Speaking about his dance and attire Bernard said “I was told I had a great week… I went out on Monday morning and missed work… I lost my dancing bag with my dancing jeans…”

The judges were not impressed by Bernard’s performance with Brian Redmond saying: “What’s new pussy cat… not much Bernard .. still messing about with the belly belly bum bum I’m going to put a call out to ban the belly belly bum bum you could be solely responsible for children around the country growing up with terrible posture”.

Loraine added: “I don’t know where to start … I get the comedy but what about the spins … you should put your tail between your legs and go and see Nicky…”.

Julian Benson concluded by saying “That was the most unique Viennese Waltz I have ever seen in my life…listen you created new steps…. the entertainment value…. I’d have liked to see less belly bum bum…but over all you can us a laugh and entertained us”.

They scored a total of 13 points.

SEE ALSO – The Sunday Interview: Bernard O’Shea chats everything Dancing with the Stars