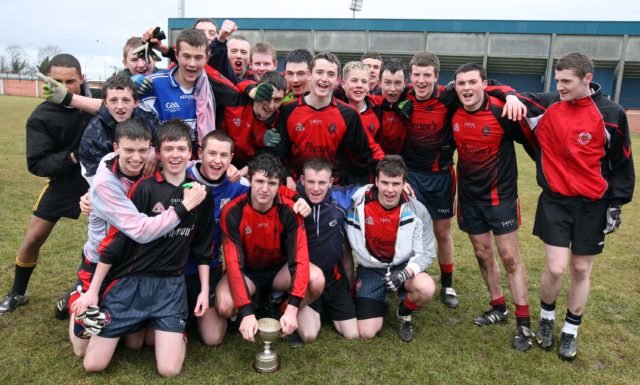 It wasn’t the most skillful or beautiful game to watch but if you were in attendance then you certainly were entertained.

Portlaoise’s old grounds was the venue, in the shadow of O’Moore Park, and it was a cold, wet day for those on the pitch with a mucky sod playing havoc with players footing.

The game had it all really with a frantic finish, some spectacular scores along with a couple of fights and throw in the four red cards dished out by the referee, it all added up to an great spectacle.

There was a big selection of talent on display too with current Laois keeper Graham Brody playing the net minder for Portlaoise, and Stradbally and current League of Ireland soccer player, Garry Comerford doing damage from centre forward scoring 1-2.

Another Stradbally man, Podge Fitzpatrick, lined out at wing back and has since gone on to play a part in Stradbally’s 2016 County Championship success. Portlaoise duo Liam McGovern and Martin Staunton are regulars on the Town’s intermediate team.

Gorey were much the stronger in the opening half leading 1-5 to 1-1 at the break, but it would be a rejuvenated Portlaoise team that would ultimately kick on in the second half to clinch the glory.

Having lost Damien Mullally to a red card with eight minutes left on the clock, Portlaoise battled back from two down to draw level through Staunton and Comerford frees. But moments later, all hell broke loose and Staunton and Fitzpatrick were sent to the line.

Down to 12 men, with Gorey also having lost a man, it seemed an uphill battle when Gorey won a free within scoring range.

Luckily the free strayed wide and in the next play, Portlaoise drove up the pitch and worked the ball to Garry Comerford who kept his cool to knock over the winning score.

Gorey were unable to score in the second half an it cost them dearly.

So it was the narrowest of victories for the Portlaoise side, and that win seen them face Colaiste Choilm of Tullamore in the semi-final of Leinster, but unfortunately the lost out by five points to end their championship campaign.