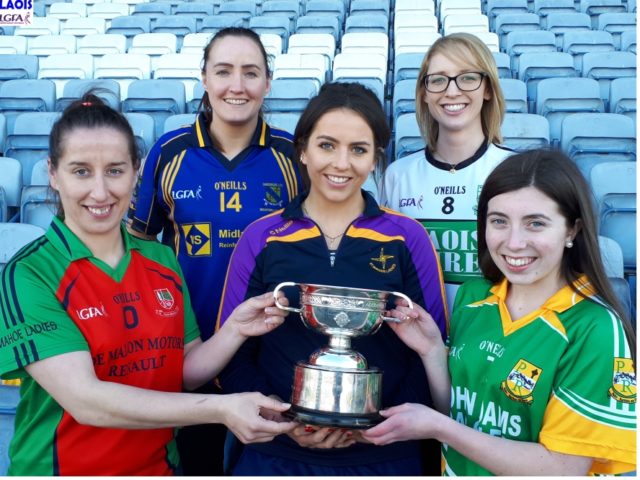 The Laois ladies senior football championship gets underway this weekend on Sunday 6 May and the question on everyone’s minds is who can deny the current county champions this year.

The Mountmellick-based club are going for their first six-in-a-row but there’s a list of teams queuing up to knock them off their throne.

Portlaoise will be keen to go one further after losing in the final last year, while Timahoe have strong tradition and experience on the their side. Park-Ratheniska have a steady stream of youth and momentum after winning the intermediate title last year while St Brigid’s have an amount of quality to call on and will be silently fancying their chances too.

All five teams play each other once and although four go through to the semi-finals. Getting early wins will be key to avoid the race to the bottom.

Let’s have a look at the contenders in the mix.

The champions, the favourites and the standard bearers. Have won five titles in a row, seven in total since they got their first in 2008 and have been in every final since 2006. Gerry O’Flaherty took up the reins as manager from Alan George last year and has continued their winning form.

While Laura-Marie Maher will be out for the year with a cruciate injury, Aileen O’Loughlin is off on maternity leave and Rachel Williams is abroad, their is an ambundance of talent in the squad and a strong bench to work with.

Ciara Burke is back to full fitness and stalwart Tracey Lawlor returns yet again. Claire Conlon, Alison McEvoy, Meghan Dunne, Joyce Dunne, Mags McEvoy and Jenny McEvoy are all of intercounty calibre too.

They deserve to be favourites and will certainly be the ones to beat.

After suffering a heavy defeat to Sarsfields in the final last year, Portlaoise will be raring at the opportunity to take down the champs.

They are under the guidance of new manager Ciaran Conroy this year. Conroy is a Portlaoise man with a background primarily in athletics but was also a coach on the Laois Ladies senior football team.

The Portlaoise side with be without Laois camogie star Sarah-Anne Fitzgerald due to injury but have other household names among their ranks including Olga Parkinson, Aisling Saunders, Aisling Keogh and Fiona Dooley.

Write them off at your peril.

The Ballylinan and Killeen side have a new manager at the helm this year. Clare man John Dunne is over the side with Ballylinan native Ger Walsh ably-assisting him.

Laois’s corner-back Amy Potts, wing-forward Caoimhe Simms and the Moore sisters Jane, Anna and Emily Moore are some of the well-known faces on the side and they are joined by skilled minors such as Aine Lacey and Niamh Phelan. John Dunne’s side are out in the first round against Timahoe on Sunday.

John Scully has returned to train the ladies in Green and Red this year and judging on his managerial success with Scoil Chríost Rí, skill and fitness won’t be an issue.

While Scully returns to Timahoe this year, so does Aisling Donoher, formerly Quigley, who is bound to have a huge impact on the team.

The likes of Maggie Murphy and Mo Nerney are currently among the main performers for Laois. Orla Knowles and Sarah Larkin are some of their rising stars while Maureen Young takes the reins as captain this year.

Park-Ratheniska are certainly a club on the rise. The green and gold women have some of the best young talent in the county at the moment with players like Erone Fitzpatrick and Intermediate player of the Year Anna Healy doing their bit for their club and county.

Fiona Kelly has also taken up the position of Laois goalkeeper this year.

Confidence is on a high at the club having claimed an Under 12, Under 14 and intermediate county finals in 2017. They also recorded impressive wins over St Conleth’s and St Brigids in this year’s league.

St Conleths remain in the senior championship after being promoted from the intermediate grade two years ago.

Shauna Quirke is one of their big names having established herself as a wing-back on the Laois senior team and they have a number of rising stars including Eva Galvin while the likes of Alannah Havill, Maria Byrne, Olivia Deverall and Mary Cotter are fierce opponents also. They have been successful at a number of the underage grades and if they come trough smoothly they have the makings of a fine team.

Former Laois footballer George Doyle is at the helm and he’ll have them ready to compete with the best again this year.

SEE ALSO – Rory’s Stories, being stranded in car parks and sex parties in Laois, it’s all in our Tweets of the Week