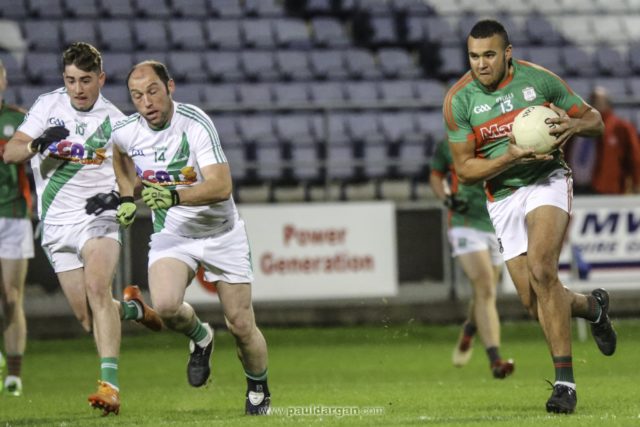 Graiguecullen kicked the final four points of the game to see off neighbours Killeshin in a brilliant SFC replay this evening.

In a game that turned from one direction to the next, Graigue finished the

Killeshin made the fast start last week but it was Graiguecullen this time.

Ross Hennessy put them ahead and a minute later Danny Alsybury was fouled for a penalty that Mark Timmons came up from centre back to convert.

Shane O’Neill then added a point and Graigue were five up after as many minutes.

David Aston got Killeshin off the mark and although Jamie Parr instantly wiped that out, we were level for the first time by the midpoint of the half.

David Aston and Stephen Attride raised white flags either side of a simply stunning goal by teenager Mikey Doran.

Cathal Brennan released him forward and he ran along the end line before unleashing an absolute thunderbolt to beat Danny Bolger from the tightest of angles.

Aston and Cathal Brennan kicked a point more each but Graiguecullen would have the ball in the net again after 18 minutes.

Aaron Forbes, who was a real threat with his runs from midfield all night, charged forward and his shot was palmed into his own net by Arnie Mahon.

The effort was on target but perhaps keeper Shane Coakley may have saved it only for Mahon’s unfortunate intervention.

Danny Bolger then kicked Graiguecullen further clear before Killeshin hit back via Aston and Doran to edge ahead once more.

Aaron Forbes levelled matters though and Bolger looked to have sent Graigue in with a slender lead but Cathal Brennan’s solo point left it level at 2-6 to 1-9 at the break.

David Aston kicked Killeshin in front on the resumption of play but Ross Hennessy replied straight away for Graigue.

Ambrose Doran kicked his first and his first start of the season after a long time out with injury.

Killeshin then had a great goal chance when Evan Lowry broke through but his shot came back off the bar. They did get level with twenty to play though thanks to Aston.

Ambrose Doran curled over his second though and Graiguecullen led again as we went into the final quarter.

Brian Byrne put two in it from distance but just as the game seemed to be getting away from Killeshin, they came straight back.

And incredible run by Arnie Mahon saw him beat a host of defenders before looping a handpass over Danny Bolger where David Aston was on hand to palm the ball home.

Trevor Collins levelled the game but Evan Lowry replied instantly to leave one in it as we entered the closing five minutes.

But keeper Danny Bolger came up for his third free of the game to level things before sub Lee Timmons and Brian Byrne gave Graigue the lead as we entered four minutes of injury time.

Byrne added another free and that would be it as a vital interception from Jamie Sheehan was crucial as Graigue saw it out.