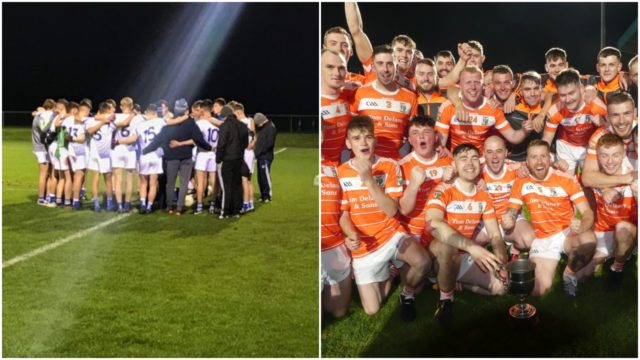 There were mixed fortunes for two Laois teams who were action at opposite sides of the country.

The hurlers from Slieve Bloom travelled to the capital for Round 1 of the Leinster JHC but suffered defeat.

However, there was better luck for Donnacha Phelan’s U-16 Laois team as they gave their Fr Manning Cup campaign a shot in the arm with a win against Roscommon in Connacht.

Here is a run down on both games:

The Laois U-16 footballers are back in the Fr Manning Cup after they scored a five point victory away to Roscommon this afternoon.

Donncha Phelan’s men lost out by narrowly after conceding five goals against Wicklow midweek but a fine second half performance saw them take the win here.

Laois trailed by 1-6 to 0-10 at half time, a goal from the returning Paul O’Flynn keeping them in it.

But Laois had 12 different scorers on the day and they improved gradually in the second period with a goal from wing back Mark Kehoe proving crucial.

Ciaran O’Neill was once again steady on the frees as Laois recorded their first victory of the competition.

Laois face Louth next Saturday away where a win will hopefully see them qualify from the group.

Slieve Bloom’s Leinster campaign is over after they were beaten in Round 1 of the championship in Dublin today.

The Laois IHC winners were up against their hosts who had only won their championship three days ago.

Slieve Bloom had to wait over a month for this game and perhaps that accounted for their slow start which saw them trail by 2-9 to 0-7 at half time.

They rallied somewhat in the second half by a second St Maurs goal put the final nail in the coffin and it is the Dublin side who progressed.

Slieve Bloom will be disappointed but it has been a brilliant year for them and they will play in the Senior A grade next season.