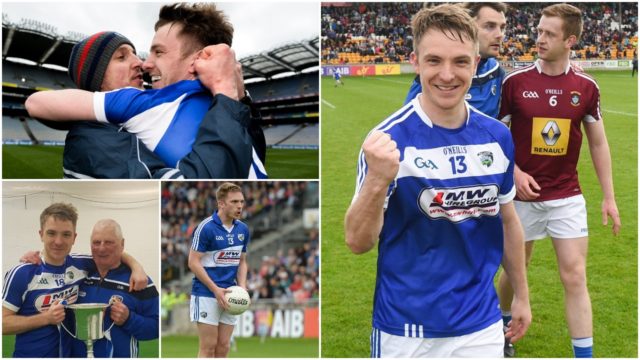 16 years ago yesterday, Ross Munnelly played his first ever senior game for the Laois footballers in a league match against Down.

Since that match, Laois have played a total of 118 games in the league and Ross has now played in 100 of them.

According to the Laois GAA Bible on Twitter, he started in 82 of those games and scored in 80, amassing a total of 7-227.

Ross started just his second league game of the season last night and he was in brilliant form.

He kicked three points from play, with the last of them, which came right at the start of the second half, setting the tone for the second half performance that was about to come from his side.

And after 75 minutes, the 36-year-old was still running around the middle of the field – helping his side retain possession and run down the clock to see out the win.

Speaking to RTE Sport afterwards, Ross revealed that he didn’t know it was his 100th game until it flashed up on the scoreboard at full time.

Unsurprisingly, he spoke about the importance of the win for the team rather than his own personal accolade.

He also recalled his first game for Laois against Down and how he had planned to just watch the game before Mick O’Dwyer asked him to tog out as a sub.

Ross describes playing for Laois as a ‘tremendous honour’ and he also feels that age is no barrier to how long someone stays playing for.

Manager John Sugrue led the plaudits to Munnelly in his post-match interview.

He said: “To be fair to Ross, he played in Croke Park against Louth and sat down since. We are mindful of the amount of mileage that he has and mindful of giving other lads chances.

“But then he comes in tonight and puts in a big shift for us. So great credit is due to the man.

“I only really learned after the game that this was his 100th game and thank God we didn’t take him off.”

Laois GAA released this class video of Ross’ exploits over the last 16 years too:

Tonight is an important match for laois but also a historic match for Ross Munnelly.

Congratulations Ross on a magnificent milestone in your career. pic.twitter.com/QPDlv8Q4fI

While Twitter was also awash with positivity towards Munnelly.

Class act on and off the field… and plenty of craft in those boots yet ??@CLGLaois

I see Ross Munnelly passed the century mark in appearances for Laois tonight. Great servant to them but I’m still haunted by that goal in the 2003 Leinster Final. #Theonethatgotaway

What a servant of Laois football Ross Munnelly has been. Another great performance on his 100th appearance.