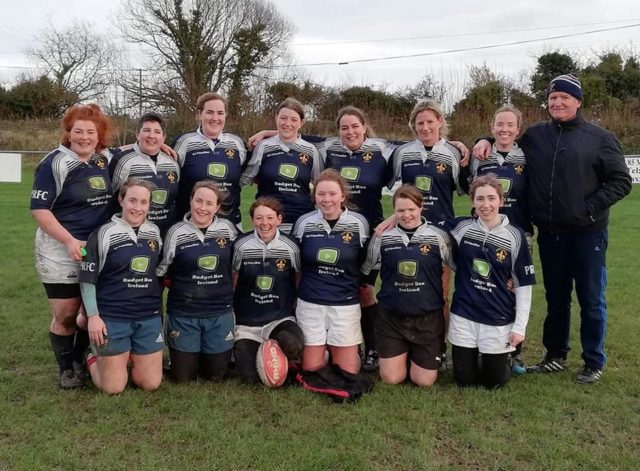 Portlaoise RFC women are through to the Division 4 League final in Naas RFC on Saturday, March 23 at 2.30pm.

Portlaoise are taking on home side Naas RFC, who have only entered a women’s team in the competition for the first time this season.

In recent times, Portlaoise don’t have too many fond memories of finals.

Last year Port Dara Falcons defeated them, the year before that they were beaten by Wanderers.

Speaking to player Rosie Palmer, they are keen to put this in the past, and focus solely on what they need to do this weekend.

“We’re going to go out and put our heads on and give it our all. We have one job in our minds for this game,” she said.

Portlaoise finished just behind Naas on the league table, winning nine games from 14. They had a strong 34-0 win over Greystones to send them through to the finals.

Naas have had a near-perfect season, losing just one of their 14 matches. Their semi-final game was conceded by Tullamore J1.

The Kildare side defeated Portlaoise 20-10 in their first meeting, but the return visit was a lot closer, ending in a thrilling 29-29 draw.

Head Coach Martin Murphy had this to say before the game.

“The season has been a difficult one for the Portlaoise Ladies team primarily due to a lack of players, some of whom made themselves unavailable and others through injury or retirement.

“At no stage during the current league campaign have the team been able to field 15 players and as a consequence have had to play 13 aside in the competition.

“The team has relied solely on 14 players who have been extremely committed and totally determined throughout to reach the final again this year following the disappointing loss to PortDara RFC at the same stage last season.

“The Portlaoise players have prepared really well in the last few weeks and were extremely good against a fancied Greystones team in the semi-final.

“Portlaoise will face the favourites, Naas RFC in the final, a team who are really well coached by former Irish International Jenny Murphy.

“Portlaoise Ladies are a really spirited bunch of players, who will give everything they’ve got out on the field to win this game on Saturday. It’s certainly not beyond this small group of players to bring long overdue silverware back to Togher on Saturday night,” said Murphy.

This tight encounter rounds off the day of league finals taking place in Naas RFC, with the division 2 and 3 games also taking place there.

Captain Alison Holmes is very excited about the day ahead.

She said: “Portlaoise has a strong tradition of success in ladies rugby, having produced league and cup winning teams and many players who have been capped at both interprovincial and national level, past and present.

“A huge catalyst for that was winning their first Leinster League title over a decade ago and progressing to AIL. This current team have the talent to replicate that success.

“We’ve really punched above our weight this year relative to our numbers and resources. This was largely down to leadership shown by some players when it was needed and the professionalism and committed management that Martin brought.

“We expect another tough encounter with Naas Saturday but if we can replicate the performance we gave in the semi final it should make for a great game of rugby.

“Either way we we’re very proud to be representing ourselves and the club in yet another final.”

Portlaoise RFC take on Naas RFC in Naas RFC on Pitch 2 at 2.30pm.