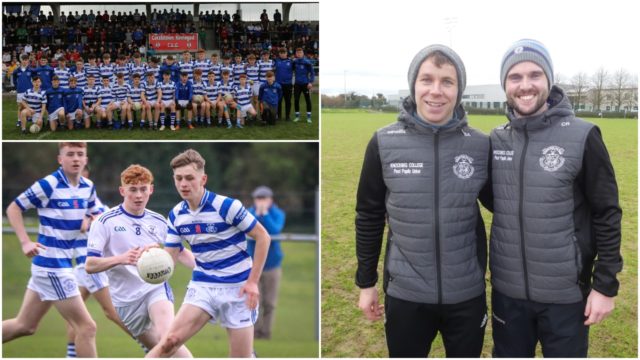 The Knockbeg U-16 footballers remarkable season came to a sad end on Saturday as they lost the All-Ireland final to St Colman’s College Newry by a point.

The side, co-managed by Laois senior football captain Stephen Attride and Athy’s Conor Ronan, lost on a 0-14 to 3-6 scoreline in somewhat controversial circumstances.

Referee Liam Devenney’s decision to show Knockbeg’s Oisin Hooney a second yellow card just before half time was the turning point in the game.

Hooney’s second yellow was the correct decision but it was the first that was completely wrong.

Newry’s Aaron Norris threw a number of punches in Hooney’s direction off the ball and although the St Joseph’s player didn’t retaliate, on consultation with the linesman, referee Devenney showed both players yellow cards – something that would be very costly for Knockbeg.

Aside from the red card, Knockbeg had chances to win the game and they were left ruing a number of wides in the second half plus a missed penalty.

Manager Attride said he was devastated for the lads but he was extremely proud of all their efforts this year.

He said: “It really was a heartbreaking way to lose. To go down by a point is a terrible feeling but I couldn’t be prouder of the lads.

“All 36 of them have put in a phenomenal effort from when we started back last year and we have gone on an incredible journey.

“From losing our very first game down in St Peter’s, we have come back to win the South Leinster and Leinster titles.

“It would have capped it all to win the All-Ireland but it just wasn’t to be. But I can’t fault any of the lads, they gave their all in the final as they have done all year and it just wasn’t enough this time.

“But they are a fantastic bunch of young men who have big futures ahead of them.”

Attride also thanked all the businesses who have come on board to sponsor gear for the team this year.

He said: “I’d like to thank Kaideen & Co Ltd in Baltinglass for sponsoring t-shirts and also to Jamie Moran Holmes Ltd for providing the lads with gear bags.

“Laois GAA, Carlow GAA and many of the clubs in each county also generously contributed to the the team and that is greatly appreciated by the school, players and board of management.

“I’d also like to thank all the students, past and present, plus families and friends who came to Kinnegad on Saturday to support the lads.

“When we were really up against it in the second half, they drove the team on and it really does make a difference.”

Once again our #KnockbegArmy was magnificent today. When our Junior Footballers were up against it in the 2nd half, they were driven on by the massive support you gave them. Really appreciated. Great to see so many connections to Knockbeg in Kinnegad today, both past & present. https://t.co/nyn5zxCJSA

We have no doubt that this Knockbeg team will be back and will go hard for the senior All-Ireland in two years time.