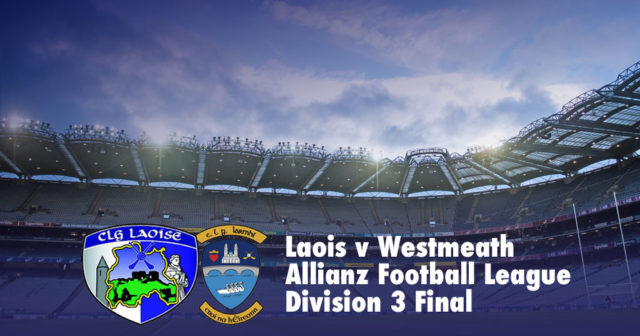 A Division 3 league final will never be the biggest deal in the GAA calendar – but the Laois footballers haven’t won enough over the years to turn their nose up at the opportunity of lifting silverware in Croke Park,

This Saturday evening, Laois and Westmeath do battle in the delayed Allianz Football League Division 3 decider on Jones Road with the game throwing in at 4.45pm.

As the countdown continues, we round up some of the bits and pieces of news ahead of the big game.

Mayo referee confirmed as the man in the middle

Mayo’s Jerome Henry has been appointed as the referee of Saturday’s game. Henry hasn’t taken charge of a Laois game in almost two years – his last game involving the county was the 2-18 to 0-14 loss to Clare in the 2017 All Ireland Qualifiers.

He also reffed that season’s 1-13 to 0-13 league win over Longford. Incidentally, Henry sent off a Laois player in both of those games – John O’Loughlin against Clare and Evan O’Carroll against Longford. Both were for second yellow cards but the Laois players will want to keep on his good side.

Henry’s biggest recent game was the Round 6 Division 1 game between Dublin and Tyrone.

Tickets for Saturday’s game in Croke Park – which also includes the All Ireland ‘A’ and ‘B’ football colleges finals – are priced at €20 for adults for €5 for juvenile. They can be purchased from the GAA website here.

Only the Hogan Stand will be open and seats are unreserved.

We’ve been having a bit of fun over on our Instagram page this week as we ask our followers to vote for their favourite Laois forward of the last 35 years or so.

We picked out 16 of the top forwards from the 80s, 90s, 00s and 10s and have pitted them against each other in a round-by-round series of voting.

Almost 10,000 votes were cast in total in Round 1 (close to 1200 in each of the eight pairings) and the results were as follows:

Voting for the quarter-finals is now underway in the following pairings:

It’s all a bit of fun but it is shaping up to be a serious battle in its own right too!

Laois were in Division 2 but were in good company – with Kerry and Meath, All Ireland champions in 2000 and 1999 respectively – as well as eventual 2002 champions Armagh.

Laois beat Meath in Navan early on in the competition but the two teams topped the group with 11 points each, Laois losing away to Wexford and drawing with Tipperary.

Laois then beat Armagh in the semi-final in Longford to qualify for a final meeting with Kerry in the Gaelic Grounds in Limerick.

On a horrible day, Laois were beaten 1-9 to 1-5, Kerry’s goal – as well as two points from play – coming from Colm Cooper on his first senior start.

“Kerry collect yet another title with little fanfare,” was the Irish Independent headline the next day. Tom O’Riordan’s report described the game as “dour and unattractive”.

“However, the name on everyone’s lips was that of 18-year-old Colm Cooper,” wrote O’Riordan. The young man from Killarney … seems to have a great future in the game as he displayed many of the qualities necessary to make it to the top.”

Laois would later lose to Offaly in the Leinster championship and then Meath in the All Ireland qualifiers, a loss that would bring an end to Colm Browne’s second term as manager.

Kerry went all the way to the All Ireland final, where they lost a famous clash to an Armagh side that Laois had beaten in the spring.