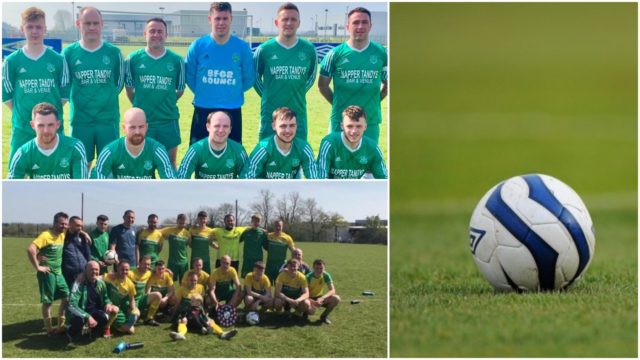 In glorious conditions this Sunday, a number of Laois teams were involved in action across the province.

This was an extremely tight affair that finished level after 90 minutes and the sides could not be split in extra time either.

The game went to penalties where Crettyard won 3-1 to claim the shield.

Below, we have full reports on games involving Stradbally Town, Rosenallis and Towerhill Rovers.

Stradbally were fastest out of the blocks on three minutes when Jimmy Langton broke down the right crossed for Jody Dillon who trapped the ball and then layed off for Benny Lawlor who coolly finished from 8 yards under the outstretched Moate keeper.

Stradbally’s pace throughout the team was causing Moate all sort of problems especially down the right where Jimmy Langton was getting good joy against the Moate left full.

Moate’s first chance came on 13 minutes when a 22 yard free-kick was well defended by the Stradbally wall. Stradbally doubled their lead on 22 minutes when Benny Lawlor was upended in the area and Jody Dillon made no mistake from the penalty spot.

It was 3-0 on 27 minutes when a fine individual run from Benny Lawlor saw him cut down the left and eventually round the Moate keeper for an easy finish. Moate

finished the half with a flourish and nearly had joy from a corner kick but Stradbally managed to clear, 3-0 at the break.

Stradbally kept the foot on the pedal in the second half and went 4-0 up on 56 minutes when Langton and Dillon combined down the right again with the latter being set on goal to side step two Moate defenders and slot low to the left hand side of the Moate net.

On 71 minutes Stradbally made it 5, again Jimmy Langton causing havoc down the right with his pace and this time he crossed home to his nephew Jack Langton who slotted home at the back post.

Stradbally were relentless at this stage and again Jimmy Langton was on hand when he chased down the Moate defense and pressed them into a mistake winning the ball before passing unselfishly to Jake Byrne for the substitute to slot home to an empty net, 6-0 on 76 minutes – which would be the end of the scoring.

Before the cup final tough, Stradbally will have more Cup business to attend to in the form of a Counties Cup quarter final against Division 1 side Horseleap United.

Rosenallis knew a win would guarantee at least a playoff with Walsh Island, who play Horseleap themselves on Wednesday night, and a Donnagh Callaly hat-trick helped them do the business this morning.

And after 20 seconds of the game they were in the lead. Straight from their tip-off, Marcus Redmond worked the ball down the left wing with Mark Dunne before Redmond Squared the ball to Donnagh Calally who finished first time.

There was no let up from Rosenallis and within 10 minutes the lead was two. Donnagh Calally was a constant threat up front and his great work made the space for another square ball into the box, this time Mark Dunne was on hand for the finish.

20 minutes into the game, the game was effectively over. Donnagh Calally got in behind the defence and finished well to make it 3-0.

A rare attack from Horseleap was rewarded with a close range free, and from the free kick Horseleap thought they had a goal.

The free went direct into the net from the free after Paul Friel in the Rosenallis goals stepped aside to let it in. However, he knew the free was indirect, and the goal would not stand, even if no one else was as switched on as he was. Very clever play from the veteran keeper.

The second half started in the same fashion as the first with almost an identical goal coming seconds ago free the restart from a cross from Marcus Redmond and a smart finish from Donnagh Calally for his hatrick.

The second half petered out after this with the Rosenallis defence never really being troubled, but there was still time for the best goal of the day. A Rosenallis corner was cleared by the Horseleap defence, only for Damien Gorman to volley a wonder strike into the top corner from 25 yards out and make it 5 for Rosenallis on the day.

In truth, Rosenallis could have had another few goals apart from a superb performance by the Horseleap keeper.

Rosenallis now await Walsh Island’s game against Horseleap on Wednesday night, knowing anything other than a win for Walsh Island hands then the title.

A last minute wonder-strike from Joey Delaney helped Towerhill Rovers maintain their place in fourth in the table with one game to play.

Towerhill started well for the first 20 minutes and had plenty of the ball.

Good work on the right from Paddy Downey saw the ball come to Emeka in the box who turned and shot first time low in to the corner.

Coolraine equalised before half time though as Towerhill were caught out by long ball over the top and the very pacy striker got through on goal and finished well.

In the second half, Towerhill got back on top, played some good stuff again but neither side could find an opening.

With the last play of the game, keeper Tommy Tynan launched a free kick into the box, Emeka won the header and on the edge of the box Joey Delaney jumped and scissor-kicked the ball and it flew into top corner.

If he meant it, it was unbelievable finish like Paulo Di Canio from years ago. That was the last kick of the game as Towerhill claimed the three points.

SEE ALSO – Snoop Dog in Portlaoise, photography for boyfriends and the Blue Bridge – It’s our Tweets of the Week