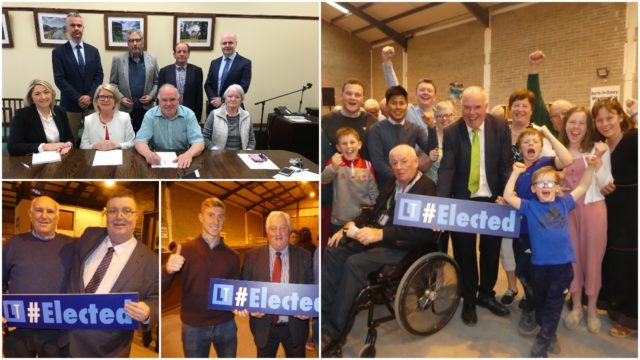 Three new chairmen and vice-chairpersons have been elected this morning as the three local areas of Laois County Council met for the first time following the May Local Elections.

In the Borris-In-Ossory-Mountmellick area, former Cathaoirleach of Laois County Council John King of Fine Gael was elected as chairman.

Cllr King was nominated by newly elected Fine Gael Councillor Conor Bergin and that was seconded by Seamus McDonald.

Mr King succeeds Paddy Bracken and will be assisted by Fianna Fail’s Seamus McDonald who was elected by vice-chair following a proposal by Paddy Bracken which was seconded by John King.

Cllr Clooney said although he was probably better known for ‘growing cabbages and turnips’ he hoped to learn a lot about his new role in the coming weeks.

Cllr Conor Bergin said that the Borris-Mountmellick area covered 42% of Laois in size and joined Cllrs James Kelly and Seamus McDonald in calling for greater resources in terms of staffing to be provided.

Director of Services Donal Brennan said that while he would not discuss staff in a public meeting, he was aware of the issues and would look to address them.

Cllr John Joe Fennelly (Fianna Fáil) will be Cathaoirleach of the Portlaoise Municipal District for the next 12 months while first-time councillor Thomasina Connell (Fine Gael) will be the leas Cathaoirleach.

The arrangement comes on the back of the power-sharing deal between Fine Gael and Fianna Fáil.

Cllr Fennelly takes over from his party colleague Catherine Fitzgerald who was in the role for the last year. She was praised by Cllr Willie Aird for “being very fair to us all over the last 12 months”.

Cllr Fennelly was originally elected in the old Borris-in-Ossory area but his base in Abbeyleix was moved in with Portlaoise in 2014, meaning a change of sorts for him in recent years.

“We have worked well together since the areas changed five years ago,” he said. “And we can all work together to make this area a better place for everyone living it,” he added.

Cllr Noel Tuohy said Cllr Fennelly was “most approachable” and “did a great job” when he held the role before while Cllr Mary Sweeney said that he “was a great chair in a previous capacity”.

He will be assisted for the next year by Fine Gael’s Tom Mulhall who will act as vice-chairman.