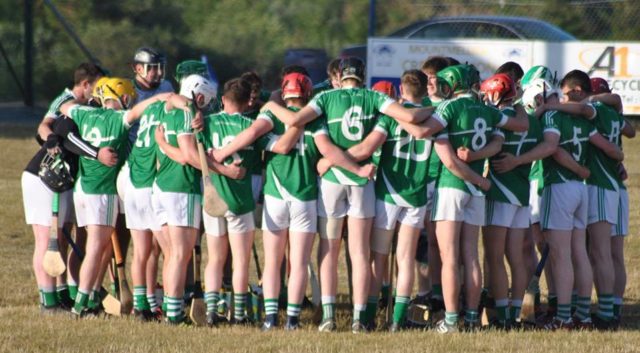 A turnup for the books in two games tonight means that it’s still all to play for in the bottom half of division 1 in the ACHL.

Abbeyleix proved worthy nine point winners over Clough-Ballacolla to get their first win of the league under their belts, while Castletown saw off Rathdowney-Errill in Castletown.

A win for The Harps over Rosenallis means that Castletown, The Harps and Rosenallis are all level on four points, with Castletown on top with points difference.

Abbeyleix are bottom with two points but everything is now pinned on the final round of the league to see who will be relegated and who will be saved.

Other matches this evening involved U17 and U13 hurling leagues, with a playoff in the U15 football league.

Over a dozen Michael Lanigan points helped The Harps scoop a crucial victory away to Rosenallis tonight.

Both sides, although depleted by injuries and intercounty commitments, put in a good shift in Rosenallis this evening – but The Harps dashed Rosenallis’s early lead with a cluster of Langian frees and a Pat Walshe goal to finish five point victors this evening.

Rosenallis Brian Fitzpatrick opened the scoring account for the game this evening by placing over his first of four frees before Tommy Moore cut out the next Rosenallis attack and set up David Doheny to put The Harps on the scoreboard.

Fiachra C Fennell – a welcome addition to the Rosenallis side after six months abroad – rattled the net for the home side to make it 1-1 in under five minutes.

Shane Donohue used his sideline to find John Brophy who gave The Harps their second, before a foul on Ronan Murray in the square set up a penalty which Rosenallis goalkeeper Stephen Kelly neatly put away in the bottom right corner.

Rosenallis’s Niall Doolan slotted over a point after gathering the sliotar from the opposing puckout while Langian and an unmarked Conor Dunne gave the visitros five points after 10 minutes.

Contributing to the next five points of the half for Rosenallis were; Jack Conroy, Ronan Murray, Kelly (free), Fiachra C Fennell and Fitzpatrick (free).

However Lanigan would keep The Harps right beside the home team to leave just two between them at half-time.

The wing-forward scored the remainder of the points for The Harps in the opening half – six in total – bar one, which came from the stick of substitute Aaron Grady.

At the interval, Rosenallis lead 2-8 to 12 points.

Lanigan continued to dominate the scoring for the visitors in the latter half – adding a further six points to his name, five of these coming from placed balls.

He opened the second half scoring with a free, before Pat Walshe slotted one over from play. Walter Murphy replied for Rosenallis, in advance of The Harps taking a lead they would not relinquish after 37 minutes.

John Brophy and Lanigan sent over two points a piece, while Darren Maher laid off the sliotar to Walshe around the 14 yard line – who made no mistake in finding the net to make it 1-18 to 2-10.

Rosenallis came back through poinys from Fiachra C Fennell, Fitzpatrick (free) and McEvoy, but Brian Clancy and Lanigan pushed the red and orange forward with two minutes to go.

The deficit for Rosenallis could have been greater, if it weren’t for a stellar save made by goalkeeper Kelly on Lanigan in a one on one position. Langian gained a converted 65′ from the encounter and the sides finished The Harps 1-22 Rosenallis 2-14.

A man of the match performance from Aidan Corby wasn’t enough to get a depleted Clough-Ballacolla over the line as Abbeyleix won their first league game after six rounds tonight.

Two early goals for the home side cemented their victory and certainly makes the closing round an interesting one for all teams involved. 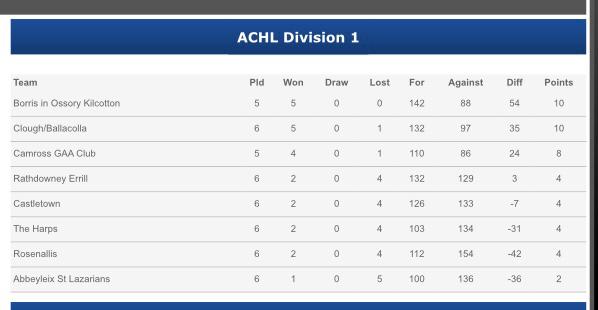