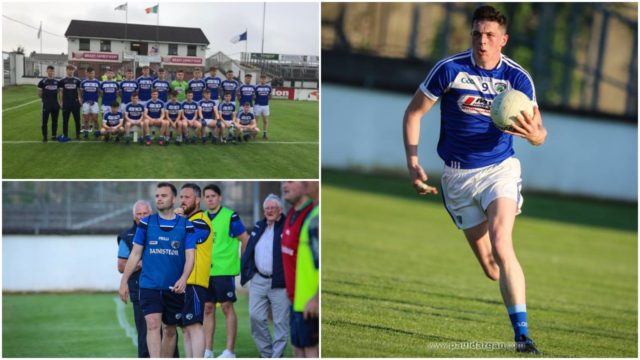 Laois are through to the Leinster semi finals after they saw off Westmeath following extra time in Mullingar this evening.

Billy O’Loughlin’s men trailed by five points at one stage in the second half but came back to force a draw and then won it in extra time.

But this game was really saved by the men who came off the bench. Jack Owens and PJ Daly were in early in the second half and their direct running completely changed the pattern of the game – while so too did the hard working Jason Maher.

Laois almost had a goal moments after the throw in when Ronan Coffey floated a lovely ball in to big Dan McCormack who shrugged off his man and charged forward only to see how shot saved by keeper Jordan Nugent.

Aside from that, the opening ten minutes were largely even with both sides trading points.

Ned Cully, Adam Flanagan and Dan Heavin pointed in that period but a brace from Alan Kinsella and one from star of the show against Kildare, Diarmuid Whelan, had the sides level.

Then Laois got a brilliant goal after 12 minutes. Rob Tyrell floated the ball in to McCormack who won it and then popped it off to Michael Doran who buried it in the net.

Straight from that goal, keeper Jordan Nugent misjudged the kick-out and it went straight to Alan Kinsella who unleashed a shot that struck both posts and somehow came out – extremely unlucky.

And to be fair to Westmeath, they took advantage of that let off to outscore Laois 0-6 to 0-3 in the final quarter of the half to go in level.

Heavin, Adam Flanagan, Diarmuid Martin and Ben Cox all pointed while Doran and Tyrell scored for Laois to leave it 1-6 to 0-9 at the break.

Westmeath continued on top on the resumption of play though as Ben Cox, Ned Cully and Dan Heavin moved them three ahead in the first couple of minutes of the new half.

Heavin took his tally to six and Westmeath lead 0-13 to 1-6 with 20 minutes to play and Laois were in big trouble.

They needed a score and Rosenallis midfielder Eoin Dunne duly obliged from long range before Diarmuid Whelan kicked another to leave two in it.

Kinsella’s third point made it three in a row for Laois and they trailed 1-9 to 0-13 with a quarter of the game to play.

Sub Ciaran Nolan fisted Westmeath two ahead again but Diarmuid Whelan’s free left the minimum between them again after 52 minutes.

Westmeath lost the free scoring Dan Heavin to injury but sub Adam Neary swung over a free to increase their lead again only for a Laois sub, Jack Owens, to hit straight back with five to go.

Laois then had four chances to get level but Alan Kinsella, Jack Owens and Rob Tyrell shot wide while sub Jason Maher saw a shot hit the upright as we entered injury time.

But then in the first minute of injury time, Alan Kinsella kicked a free to finally level the game 1-12 to 0-15.

Five more minutes were played but neither team could score again and we headed for extra time.

Laois went into the lead for the first time since their first half goal straight from the throw in when Diarmuid Whelan fired over his fifth after a great Dean Brophy run.

Westmeath got back level though via TJ Cox but Laois resumed the advantage via a Whelan free.

Laois got on top again though as Eoin Dunne landed a screamer and then Whelan his third of the half to put Laois three ahead.

Whelan added another free and then got one from play before TJ Cox cut the deficit to three once again.

Adam Neary got another for Westmeath but Laois ended the half in style when Tyrell found McCormack on the edge of the square and he dummied the keeper before buying the ball in the net.

Laois now led 2-17 to 0-18 and the lead was out to seven with five minutes of the second half of extra time left thanks to two McCormack points.

Kinsella added another but TJ Cox replied for Westmeath – although it was goals they needed at this stage.

They didn’t come and Laois advance to play Meath in the semi final next Tuesday.