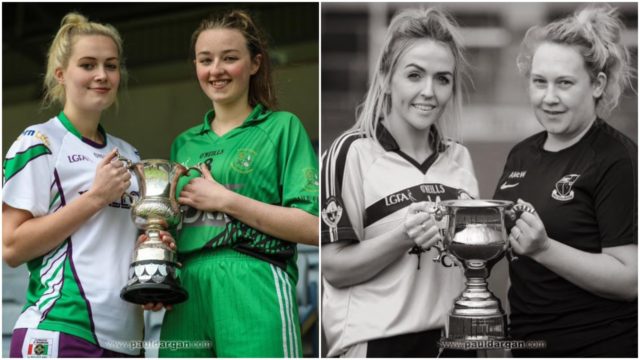 The curtain closes on the ladies football championships as the junior, intermediate and senior finals all take place this weekend.

Ballyfin and Clonaslee St Manman’s kick off proceedings in the junior final at 2pm.

Following this, Ballyroan and St Paul’s face off for the intermediate title at 3.30pm.

See a preview for each of the games below:

Ballyroan head into this final on an unbeaten run in the championship, while St Paul’s hope to make it two county final wins on the trot, having emerged from the junior section last year.

The two faced off in two very different sem-finals, with St Paul’s recording a comprehensive victory over St Joseph’s, 6-10 to 1-8.

Ballyroan, on the other hand, were pushed into extra time by Park-Ratheniska in their last outing to gain a final place.

Prior to this, Ballyroan saw off the semi-finalists on the other side, St Joseph’s, 2-12 to 2-9 in the group stages.

Among the players who hope to drive the title home for Ballyroan include three women on the Laois Ladies setup; the formidable defender Clodagh Dunne, Andrea Moran and Emily McWey.

Aoife McWey takes to the field as captain, adding to the considerable talent among the club’s ranks.

However St Paul’s have plenty of talent themselves. Take the names in with the Laois panel alone; Emma Lawlor, Rebecca Balfe, Shannon Costello, Isabella O’Toole, Zoe Keegan and Sinead O’Rourke.

Lawlor, Keegan and O’Toole, along with Niamh Crowley, were all part of the Scoil Chríost Rí All-Ireland ‘A’ winning football team this year, and know all about the big days.

Although St Paul’s struggled at the start of the year, they got their house in order to pull off three wins back-to-back towards the end of the campaign.

The pink, white and blue are certainly known for their capabilities in front of goal; scoring 6-10 in the semi-final, and 5-10 in the game before that.

This game will all depend on how Ballyroan cope with the likes of Costello, Emma and Denise Lawlor around the posts, and we’re sure to see plenty of intensity on both sides.

The junior final between Clonaslee St Manman’s (CSM) and Ballyfin should serve up to be one of the most appealing games of this triple header weekend.

Both teams have previously met in the division three final, Clonaslee sprinting to a high-scoring victory on the day, 6-12 to 1-9.

However things were much closer between the teams in the championship, with a mere two seperating the sides at full-time, 5-12 to 6-11.

Whatever the results, plenty of goals being served up in this final is almost a guarantee.

Clonaslee powered to the semi-finals, but had to overcome a tricky display from The Heath, eventually emerging as three point winners, finishing 5-4 to 1-13 victors.

Considering the fact that last year Clonaslee only entered a team in the competition last year, to win a league final and get to the championship final this year is a pretty remarkable feat.

Clonaslee have plenty of experience within their ranks, with Laois’s Hannah Russell bound to have a colossal impact on the game, as will Siobhan Conroy, Roisin Poole and captain Kate Conroy, who have all previously played under the RnC banner.

Ballyfin are managed by Peter Touhey, who took over the role from Stephen Duff this year.

This year marked the first Ballyfin player to join the Laois Ladies panel, with Niamh O’Rourke coming into the side. Niamh was later joined by Michelle Lynch in the championship.

Ballyfin have plenty of experience reaching finals, but one can’t argue with Clonaslee’s form, and they will be tipped to take home the junior title.