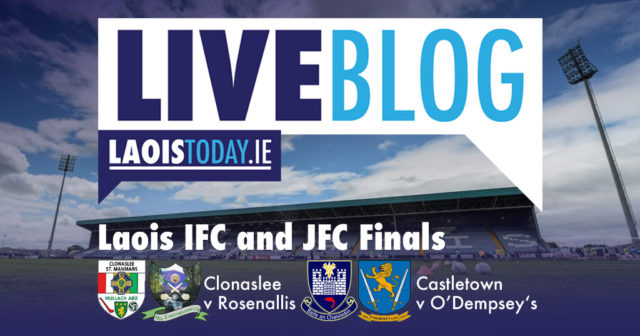 We’re hurtling towards the end of the domestic GAA season and two more county finals are down for decision this evening.

Up first, it is the battle for Junior honours as Castletown take on O’Dempsey’s in what is a rather novel pairing.

The Castletown footballers have been on an incredible unbeaten streak that stretches all the way back to July 2016.

That was the last time they suffered defeat and they have won 12 matches since leading them to their third straight county final as they look to move up three grades in three years.

That game throws in at 5.30pm and standing in their way is the side that reached this final last year.

O’Dempsey’s are back for a second cut at the Junior final having lost out to Annanough at this stage 12 months ago.

After that, it is the turn of neighbours Rosenallis and Clonaslee to do battle in Laois GAA HQ.

They face off in the Intermediate final at 7.15pm in what promises to be a very exciting affair where the winner will replace Crettyard at senior level for 2020.

And you can follow all the action as it happens in both games below:

SEE ALSO – In Pictures: Scoil Bhride Clonaslee all set to cheer on their side in the Intermediate football final