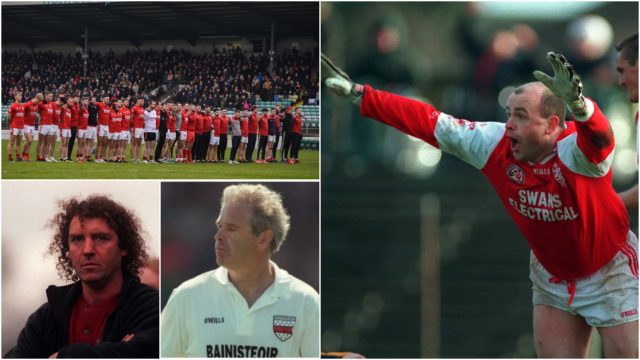 It’s a real clash of the titans on Saturday as Leinster club senior football heavyweights Portlaoise and Éire Óg collide for a place in this year’s provincial final.

Few could have imagined that despite Portlaoise having seven Leinster titles to their name and Éire Óg having five that they’ve scarcely met one another over the years aside from challenge matches.

Éire Óg really took ownership of Leinster club football in the 90s where they won all of those five titles.

All Ireland glory cruelly eluded them but famous Leinster final wins over Ballyroan, Erin’s Isle (Dublin), An Tóchar (Wicklow), St Sylvester’s (Dublin) and a trilogy with Kilmacud Crokes (Dublin) announced the arrival of household names such as the Haydens, Jody Morrissey, Garvan Ware, Willie Quinlan and Anthony Keating just a few of those to mention among many.

The Laois contribution towards this success was massive with the late Bobby Miller at the forefront as manager in the breakthrough years overseeing three of those victories.

Indeed there was a considerable Laois support for Éire Óg during that era as the dominance of a club from a nearby town in a weaker GAA county really captured the imagination.

And it had another dimension in the summer of 1995 with the famous ‘point that never was’ game between Laois and Carlow, with Miller in charge of a Carlow side whose team was almost entirely the Éire Óg side.

Laois county star Leo Turley was a useful addition to the Éire Óg side for the last of those victories against Kilmacud Crokes back in January 1999 but that’s just the tip of the iceberg in terms of a backdrop ahead of Saturday’s showdown.

That particular victory over Crokes’ was overseen by the stewardship of Portlaoise stalwart Pat Critchley who brought a fresh impetus to the club and introduced new personnel into the team which at the time raised a few eyebrows, but ultimately proved successful.

His captain for that win in Newbridge?

None other than current Éire Óg manager Joe Murphy!

So the links between the two clubs ahead of the tie are interesting to say the least.

The offspring of Éire Óg’s stellar decade of the 90s is very much at the forefront in the current squad.

The swashbuckling Jordan Morrissey is a son of Jody and great-grandson of all time Laois great Tommy ‘The Boy Wonder’ Murphy.

Derek Hayden’s father Joe was another key player in the 90s along with his uncles Colm and Brendan with the latter also having a son, Dean, on the panel.

Adam Murphy is a son of manager Joe and his nephew Jordan Lowry is also involved. Niall Quinlan – who kicked a worldie against Sarsfields from a line ball – is Willie’s son, Robbie Moore’s father Richie marshalled the defence in the early 90s, and Darragh O’Brien’s father Turlough – the current Carlow manager – was also a panellist during those golden years along with Kelvin Chatten’s father John.

Those are just some examples of the links to the current squad. There are many other family connections and in the next few years more players should filter through into the senior side.

Éire Óg have been impressive in terms of how they’ve gone about their business this year to date despite having one blip in the group stages of the Carlow SFC with a defeat to Tinryland.

However, they still qualified directly to the semi-final and in that encounter against newly formed Bagenalstown Gaels they clocked up a staggering tally of 1-30 and conceded just five points.

Many felt that a sterner test would accrue against rivals Palatine in the final but again they dispatched them with relative ease on a tally of 1-16 to 0-5 and in truth it was a lot more comfortable than the final score suggested.

Their first task in Leinster was a home tie against Wexford champions Castletown where they won by 4-6 to 1-10 but in doing so they missed a huge amount of clear cut goal chances and again should have won by a lot more.

Their most standout victory to date this year was last time out in defeating fancied Kildare kingpins Sarsfields at Netwatch Cullen Park.

That 1-12 to 0-9 victory has given them huge confidence heading into Saturday’s encounter with Portlaoise and there’s a real sense in Carlow that they can go in to the lion’s den and emerge victorious this time.

Harsh lessons would appear to have been learned following the humiliating 2-15 to 0-3 loss to St Columba’s of Mullinalaghta at this stage 12 months ago but those questions will only be answered come Saturday.

Two giants of Leinster football, Saturday night lights in the newly named MW Hire O’Moore Park, live TV coverage on RTÉ, the Carlow v Laois factor and only a kick of a ball between them according to the bookmakers.

What more could you want in late November?!

Throw in on Saturday is at 7pm.