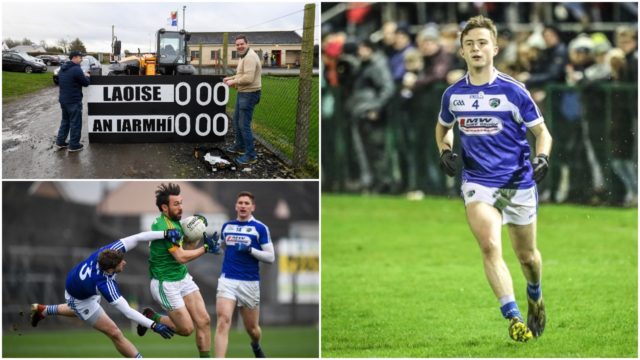 Three of Laois’s GAA teams were in action over the weekend and between them they lost their respective games by a combined total of 31 points.

The senior footballers and hurlers, along with the U-20 footballers, competed in three pre-season competitions where the results didn’t pan out the way their respective managers may have hoped.

Here, we will take a more in depth look at some of the main Talking Points from the three games.

The Walsh Cup game on Sunday involving Westmeath was the first competitive Laois senior hurling game to be played Borris-in-Ossory since this month 26 years ago when Offaly made the short trip across, then too for a Walsh Cup fixture.

And although Laois couldn’t secure the win, the club put on a fine show and their makeshift scoreboard has certainly gained a lot of attention online.

And two more young players were given their first taste of action yesterday as Clough-Ballacolla forward Mark Hennessy and Rosenallis’s Conor Cosgrove pulled on the senior jersey for the first time. Huge experience for two promising hurlers.

3 – What next for the Laois hurlers?

Following this defeat, Laois are now third in the group on two points behind Westmeath (who have played all three games) and Dublin on four points.

In order for Laois to reach the semi finals, they will have to defeat Dublin on Thursday night in Parnell Park by ten points.

This looked a tricky assignment for Laois on paper as they went to face a fairly strong looking Meath outfit in Navan.

And their Division 1 opponents punished Laois with four goals to run out easy winners. Laois now exit the competition following defeats to Offaly and Meath either side of a win over Wexford.

The start of Mike Quirke’s reign as Laois manager has been marred by players leaving the panel but here is one who has returned.

Ballylinan forward Gary Walsh, who was the highest scoring forward in the country midway through 2018, was dropped by John Sugrue for the 2019 season. But he made his comeback from the bench on Saturday and Laois will be hoping he can rediscover his form from 16 months ago.

6 – What next for the Laois footballers?

Laois now have a three week break before the start of the National Football League where they are in Division 2.

And they have a very tough assignment as they have to travel to Dr Hyde to face Connacht champions Roscommon in Round 1 on Sunday January 26.

The Laois U-20 footballers won the Andrew Cordon Cup at their ease last year but they are now in the top tier of the Development League where they fell to a 2-17 to 1-7 defeat to Kildare in Round 1.

Eddie Kinsella’s charges started the game well and actually led midway through the first half but couldn’t keep going as Kildare dominated after that.

With Niall Dunne out for the season with a knee injury, and vice-captain Ronan Coffey, Gary Saunders and Josh Lacey struggling with injuries, these could be a tough couple of weeks before the championship.

Laois have two more games left in the John Keirns Cup. They are at home to Meath next Saturday January 11 and then away to Dublin the following week.

After that, they will prepare to face Westmeath in the quarter final of the Leinster championship on February 14-15.