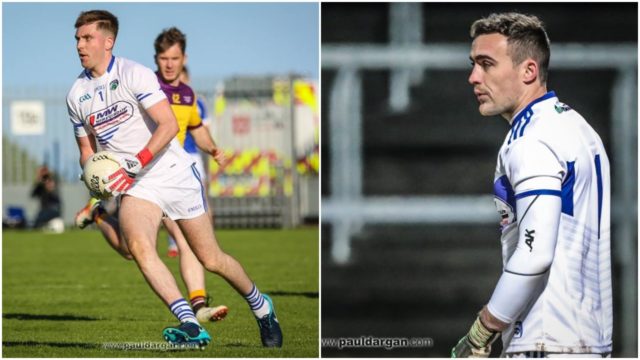 The Laois footballers are the only unbeaten team remaining in Division 2 after two rounds of the competition.

Mike Quirke’s men sit top of the pile after they followed a stirring draw with Roscommon by defeating Armagh in O’Moore Park on Saturday night in MW Hire O’Moore Park.

The Kerry native has made a lot of personnel changes this year from the Laois teams of the past but the majority of those decisions have been forced.

Donie Kingston, Paul Kingston and Stephen Attride were among those to step away with the likes of Brian Byrne, Gearoid Hanrahan, Michael Keogh and Mark Barry coming in to fill the void – and fill it very well.

But one decision that the new Laois boss had to make on his own was who would start the league season between the sticks.

Portlaoise’s Graham Brody made his debut six years ago and had been ever present ever since – right up until eight days ago in Roscommon.

The 2018 All-Star nominee found himself on the bench as Niall Corbet took the number one jersey – and he has managed to hold on to it.

The Clonaslee man’s journey to this point has been nothing short of remarkable.

12 months ago, the 25-year-old was gearing up for a season in Dalymount Park in the League of Ireland with Bohemians.

After spells with UCD and Waterford, he was signed as Shane Supple’s replacement but after a couple of games, he departed.

Corbet soon found himself back playing GAA but not in the goals – rather as a roving half forward.

His free taking was integral as Clonaslee won Division 2 of the league but they were knocked out in the semi final stage of the championship by eventual champions Rosenallis.

However, that would not be the end of Corbet’s GAA year as he was called into the Laois West team that would go on to win second ever Divisional Football Championship.

Once again, those games were spent as a forward but the Laois management team approached Corbet after that and, with Brody unavailable at the time with his Portlaoise commitments in the Leinster club championship, they asked him would he play in goals.

The Clonaslee man played his first ever game of Gaelic football in the goals against Offaly in the O’Byrne Cup and has never looked back.

He is growing into the role and against Armagh he channeled his inner Graham Brody on a couple of occasions by charging up the field – one such adventure resulting in a score for Evan O’Carroll.

Speaking after the win over Armagh, manager Mike Quirke was full of praise for the stopper.

He said: “Niall played League of Ireland soccer and is very accomplished.

“That was probably his fourth game of Gaelic football ever in the goals. All his other football has been out the field.

“So I think he is looking more and more comfortable with every outing.”

But he also paid tribute to the man who has found himself in the position of his deputy – Graham Brody.

Quirke said: “Graham, by the same token, is putting in a massive shift and is training every day to put as much pressure on Niall as he can.

“So when you have a guy doing that, it forces the other guy to up his performance.

“I thought Niall was exceptional but a lot of that is down to the work that Graham is putting in training behind the scenes to keep everything ticking on.”

Right now Corbet is in possession of the jersey – and he will be hoping to hold on to it.