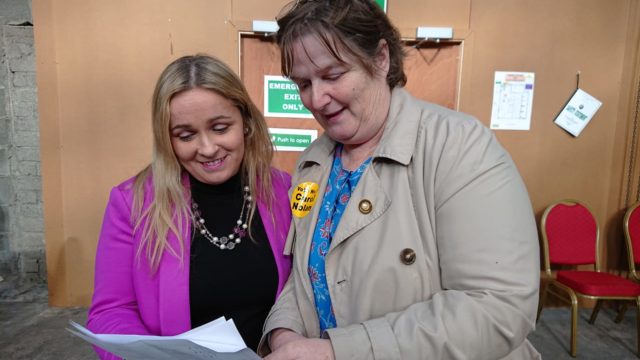 Independent candidate Carol Nolan has been re-elected to Dail Eireann on the 11th count in the Laois-Offaly constituency.

The Cadamstown woman, who was initially elected for Sinn Fein in 2016 but who parted company with the party over her pro-life stance in the 8th Amendment referendum, defied numerous pre-election predictions to pull in 5,436 first preference votes.

It was a fine individual performance given that she got 4,804 four years ago in her first campaign in the then three-seat constituency.

It left her in fifth position – ahead of fellow Offaly TD Marcella Corcoran-Kennedy and challengers from the same neck of the woods like Fianna Fail councillor Peter Ormond who is the current Cathaoileach of Offaly County Council and high profile independent John Leahy.

She also had to contend with the arrival of Green Party senator Pippa Hackett. But she got ahead and stayed ahead in the battle for that last seat and will return to the Dail for a second term.

She benefited greatly from receiving a large chunk of Brian Stanley’s transfers in the 2nd count when she got 746 transfers. In the end she got over 3,000 transfers from Leahy to take the fourth seat. Sean Fleming was elected without reaching the quota with Pippa Hackett losing out on the final count.

It means that the final make-up of the Laois-Offaly constituency sees two Fianna Fail TDs, one Sinn Fein, one Fine Gael and one Independent.

She becomes the first independent TD for Laois-Offaly since Oliver J Flanagan was first elected in 1943 though he later joined Fine Gael.

It also means that Laois hold their three TDs while Offaly lose one and go back to the Dail with two.

The state of play after the 11th count