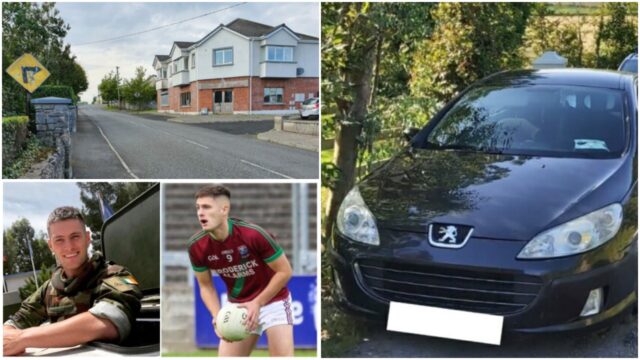 When the initial plan of Living with Covid-19 was announced, the unfairness of the decision to lockdown Laois, Offaly and Kildare was highlighted.

However since then, Dublin has been moved to Level 3.

This weather forecast from Cathal Nolan proved completely accurate – and the weather is still glorious.

A stinger device and the Garda helicopter were needed as a dangerous driver was arrested in Stradbally on Tuesday afternoon.

“Laois Roads Policing Unit arrested the driver … after it failed to stop and was involved in multiple dangerous driving incidents along the N80 between Portlaoise and Stradbally,” said Laois-Offaly Gardai in a statement.

A person presented themselves to Gardai after a young child was struck by a car in Ballylinan.

There are more than 7,000 men and women in the Irish Defence Forces – and hundreds of them are serving abroad at any one time.

There are Laois people dotted all over the world serving their country right now and one of those is Portarlington’s Paddy O’Sullivan.

The issue of derelict building that has been described as ‘an eyesore that would not be tolerated anywhere else in the county’ has come before Laois County Council.

Sinn Fein Cllr Aidan Mullins described the old AIB Bank building on main street in Portarlington as like something you would see ‘in a deserted village on the side of a mountain’.

On this week’s Property Watch, we’re taking a look at what is available for sale in the county town of Mountrath.

Mountrath is ideally located to avail of all the amenities the Slieve Blooms have to offer, is home to a state of the art co-working facility in BloomHQ, has a modern secondary school, cafes and pharmacies.

Up 36 Laois families could be taken off the housing waiting list thanks to new funding which has come on stream.

The county is set to receive €359,422 from the Voids Stimulus Programme which will see up to 36 social housing units refurbished and re-let to individuals and families, struggling with homelessness or on the social housing list.

Rosenallis lead the way with five selections after their great win over Borris-Kilcotton – but three more, Paddy Keating, Brian Fitzpatrick and Donnagh Callally can consider themselves unlucky to miss out.

12 months ago, Rian O’Connell was devastated. The Portlaoise teenager had completed his Leaving Cert and when the CAO offers came out, he realised he was one point short of getting his course.

It was agonising to fall so short and the situation remained unchanged after a number of his papers were examined again. But he made a decision which changed his life.