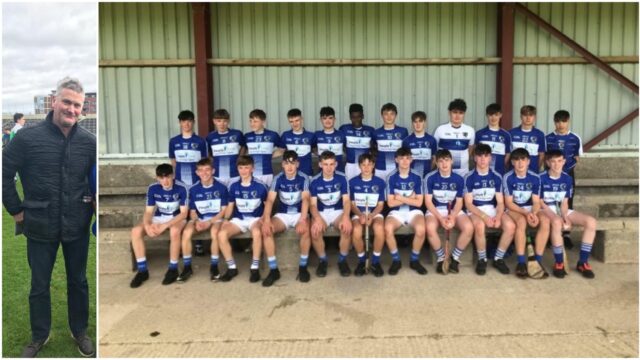 The Laois minor hurlers will begin their Leinster championship campaign away to Offaly in Birr on Saturday.

Manager Liam Dunne’s charges will go into battle at 2pm in a revamped championship that is being run on a straight knock-out basis.

Speaking to LaoisToday, the Clough-Ballacolla native explained how difficult this Covid-19 year has been.

He said: “We had a really good response to the trials. 80 young Laois men came in and wanted to represent their county.

“The panel was selected from there. Training was going brilliant, we were flying in practice matches and then the lockdown came in March.

“That lads put in a serious block of training for ten weeks but after that it became a struggle.

“But then we got light at the end of the tunnel. The club championships resumed and we were able to get the lads back together then – and it took off again.”

However, the shortened season has presented a lot of problems for manager Dunne.

The lockdown in Laois in August meant the club championships were later finishing that was originally planned.

Laois had a practice match against Waterford and had another lined up only for the GAA to call a halt to that.

The second issue facing Dunne is that he can only bring 24 players to the match on Saturday – as GAA rules say that those who are not on the match day squad cannot travel.

“We have the horrible scenario where, due to the year that’s in it, we probably have lads on the panel who won’t get the chance to put on the jersey.

“From my point of view that is very disappointing but it is out of our hands because we just didn’t get the volume of games.

“And in the one game we did get, we had to try sort out our time the best way that we could.

“From a management point of view, this is a nightmare scenario. Not being able to bring all of the squad to the game is really tough.

“Having to only name a match day 24 is bad enough but we can’t actually bring the players who aren’t selected with us to Birr on Saturday.

“Of course the worst case scenario was that we wouldn’t even have a championship this year. So we are delighted to have that and a game to play.

“But to have to leave guys behind who have been with us all the way is beyond tough. I really don’t like to have to do it.

“There will be very fine margins between the players. Nothing between starting players and panellists.”

Along with Dunne, the Laois minor management is made up of Tim Lyons, Ollie Quinlan and Derek McGrath.

According to Dunne, former Waterford manager McGrath has ‘gone above and beyond’ in his contributions to the team.

He said: “The first thing to say about Derek McGrath is that he is an absolute gentleman. He has treated every fellow on the panel with the upmost respect.

“He went above and beyond with his communication with the lads during the lockdown.

“He constantly kept in touch and any questions the lads had, he was there instantly. We will always be grateful for all he has done for this team in 2020.

“So hopefully we will get a result on Saturday to some way pay him back for all his time and effort.

Looking ahead to Saturday’s game, Dunne expects a ferocious battle between two neighbours.

He said: “Good Laois teams can be beaten by mediocre Offaly teams – and vice versa. It is a local derby in every sense of the word.

“The game has been moved from Tullamore to the home of Offaly hurling in Birr – so they definitely sense they are capable of a win on Saturday.

“This is knock-out championship hurling so you have to be ready for a battle on Saturday or you will be out of the championship.”