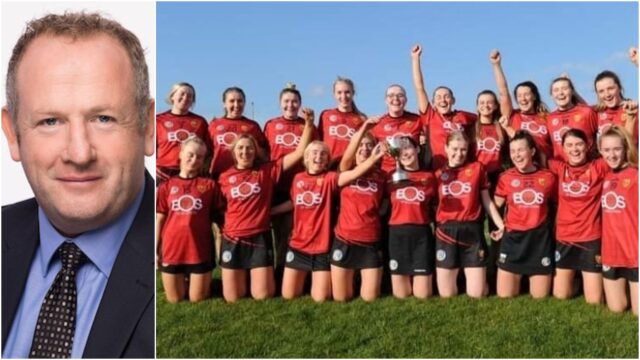 Laois GAA’s adult teams may be finished for 2020 but there will be a significant Laois interest in the All Ireland intermediate camogie final on Saturday when Down play Antrim in Breffni Park in Cavan.

Derek Dunne from Clonad is the Down manager and he’ll be hoping they can make up for the disappointment of losing the final to Cork two years ago when he was also in charge.

A former championship winner with Clonad in 1992 and a recent manager of the club as well as being involved with the DIT Fitzgibbon Cup team, he explained how he came to manage the Ulster side.

He works with Panda Recycling in Dublin where Fionnuala Carr (daughter of former Down All Ireland football winner Ross) is a work colleague. When Down’s manager left them in 2018 during the league, she asked would he go up and do a few sessions.

That quickly turned into a full-time role and two years on he’s still in the role.

“Absolutely none to be honest with you,” he said on the LaoisToday Podcast this week when asked if he had any prior experience coaching camogie.

“But I find they are absolutely a dream to train or coach. They hang onto every single word you say, you can’t fool them.

“They have been just a pleasure to train, very smart and want to improve and want to move on.”

And he says he wouldn’t have been overly familiar with Down as a county but he has familiarised himself well with the GAA community in the county.

Among the challenges he’s had to are many of their players having to travel long distances to training, including the issues over getting the ferry across from the Ards peninsula, the heartland of the Down hurling and camogie area.

“There is some girls that have about two and a half hours to get to training … and a lot of thinking goes into saying, right if the ferry is (delayed) because we can’t book them into hotels over night.

“You are looking at the tides, looking at what the weather is like, what time they have to leave at and if they can’t get over, they have to go around the long way around. Like it’s an awful lot of logistics, there is an awful lot … so it is different and the logistics is something that you have to pre-plan.”

While Dunne is disappointed that the final isn’t being played in Croke Park this year, it’s not something he’s focusing on this week.

“I do think the girls deserve a day out in Croke Park after putting in an effort like that over 12 months. It is disappointing.

“But that’s not something that you are going to into camp talking to girls about – disappointed that we are not playing in Croke Park.

“We just got to focus on the job in hand. And I have said it to them during the week, if we win an All Ireland in 2020 it’s the year of the anniversary of the 100 years of the Croke Park incident and pandemic and no fans.

“It will live long in the memory if you get a medal this year.”

You can listen to the latest Talking Sport episode on Apple Podcasts, Spotify or Podbean or below on Soundcloud.