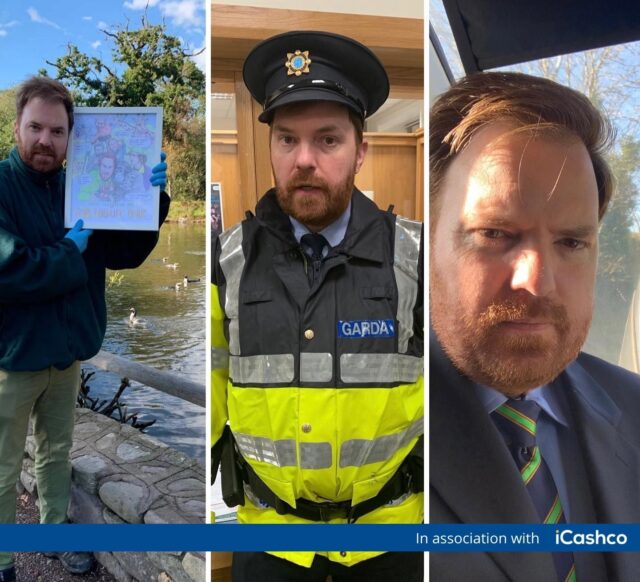 Local members of An Garda Siochana are set to feature in a new Bernard O’Shea comedy show which will air on RTE in the spring.

While filming was difficult during a pandemic year, the Durrow native and well-known Irish comedian was able to get work done on his new show that sees him spend time learning three different jobs – and also teaching them how to do a comedy gig.

“Basically I go into the guards, Iarnrod Eireann and Fota Wildlife Park and I’d do their job and then I’d train them up to do standup in front of their colleagues,” he explained on the LaoisToday Podcast last week.

“We were lucky enough to get into Portlaoise Garda Station.

“Basically it’s three programmes. Can the guards be funny? Can Irish Rail be funny? And Can Zookeepers be funny?

“I went in and worked with the guards in Portlaoise. As I used to joke with them, ‘the longest show I’ve ever done in my life’.

“Because of Covid, we were stopped and started so many times

“I don’t want to give too much away but not for me. I really don’t know how they do it. It is such a tough job.

“Just going out and thinking I could get a thump here for no reason.

“We weren’t looking to go in and do an expose … my vision was to constantly keep looking for characters and funny people and we did.

“The only problem is, a lot of people do do it and it is very competitive but stand up is very hard. It’s a difficult thing to do and unlike music, nobody is going to shout up ‘do some of your old stuff’.

“Hopefully what they got and what the viewer gets is that it’s not necessarily the funny guy or girl in your group. It’s very rarely that person. A lot of stand ups are very shy, they’re quiet. They’re reserved.

“It’s the amount of preparation and the realistion (in the show) how much work goes into three or four minutes. There’s a lot.

“But they were brilliant. Everyone we worked with was brilliant and we couldn’t have picked any better places. The guards in Portlaoise genuinely couldn’t have been better.

“When you’re in someone’s life for that length of time it can be difficult especially with social distancing. And you also have to be cogniscant of the fact that they’re doing their job. You can’t get in their way.

“For me it was a very different type of telly. I’d never made telly like that before. I’ve always made scripted. So you write it and then you go shoot it. So it was interesting.”