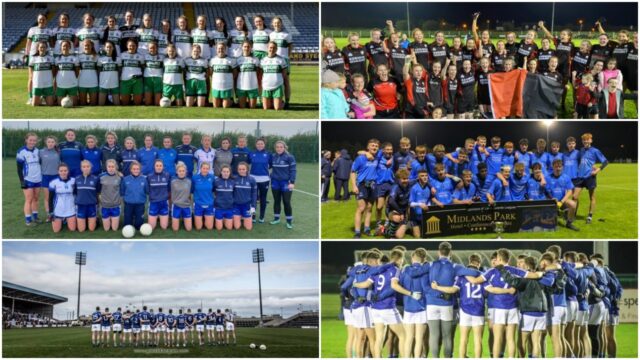 Here at LaoisToday we do our best to cover as many GAA matches as possible.

And now we’ve compiled a list of the ten best football games of the year.

With Covid-19 wiping out a lot of GAA action this year, our choices were slightly curtailed but there were still plenty of brilliant matches to choose from.

Check out our selections below:

On the last Sunday of January, Laois opened their Allianz Football League Division 2 campaign under new manager Mike Quirke away to Roscommon.

Against the Connacht champions, Laois played some good football in the opening half and trailed by just a point, 1-7 to 0-9, at the break.

But by the 69th minute Laois were six points down and looked destined to defeat. But a screamer of a goal from Evan O’Carroll and 74th minute equaliser from captain Kieran Lillis ensured a share of the spoils.

Laois bookmarked their league campaigns with thrilling games – with the pandemic ensuring that there was nine months between their first and last fixtures.

And while the game in Roscommon was of a higher standard, this was arguably even more dramatic as Laois not only came from behind to win the game, the result meant they maintained their Division 2 status.

Laois were a man down and five points down with a couple of minutes of normal time remaining but hit 3-3 without reply – two of the goals coming from Gary Walsh to ensure a stunning victory.

On a bitterly cold Monday night in February on a very wet pitch, Laois and Westmeath met in the opening round of the Leinster U-20 football championship.

Yet despite the harsh conditions, Laois and Westmeath played out a thriller, one that needed penalties after the sides were still level after extra time.

There Laois won 4-3 with goals from Mark Barry, Ronan Coffey, Jack Owens and Damon Larkin sending Laois into a semi-final meeting with Kildare.

The 2020 Laois SFC is still not finished and Emo are still in contention. Indeed they played their part in three of the championship’s most entertaining games.

Their second outing against O’Dempsey’s, played in the LOETB Centre of Excellence was one such game, as they responded from conceding a goal in the first minute to lead 2-5 to 1-7 at the break.

O’Dempsey’s took the lead in the second half and were a point up as the game ticked towards injury time. But Jack Owens kicked the last three points for Emo and they had two points to spare at the finish.

They would repeat the trick in the quarter-final against Portlaoise – scoring the last five points to knock out the champions.

Only about 10 years ago, Ballyfin and Rosenallis would have been a typical junior fixture but the two clubs have made significant strides and this year played out a thrilling clash in the opening round of the championship in Portarlington.

In their first senior game since 1996, Rosenallis led 2-5 to 0-5 at one stage but Ballyfin battled back and were only a point down at half time.

Ballyfin took over in the third quarter and though Rosenallis pressed hard late on, Ballyfin held on for a hard-earned victory. Wins over Ballyroan-Abbey and The Heath later earned them their place in the semi-final for the second year running.

Rosenallis needed a win over Courtwood to ensure their senior status.

The meeting of the beaten finalists of 2019 and 2018 in Round 3 of this year’s championship produced a cracker, one that had cards of all colours and swung one way and then the other before O’Dempsey’s clinched it late on.

A point late on from Gavin Brennan put Killeshin three up as injury time began but a Matthew Finlay goal and late points from Derek Dunne and Mark Barry ensured a two-point win for O’Dempsey’s.

They were later knocked out of the championship by neighbours Portarlington in the quarter-final.

Heading into the last round of group games in the All Ireland ladies intermediate football championship, Laois needed a number of things to go their way to get out of the group.

First things first they held up their side of the bargain by beating Kildare – but Clare’s massive win over Sligo meant Laois lost out on scoring difference.

Laois led 1-8 to 0-3 at the break after playing with the wind but conceded three goals in the second half to be three points down late on.

But a Sarah Anne Fitzgerald goal and points from Mo Nerney and Ellen Healy saw Laois record a win, which knocked Kildare out.

In some ways, this was a result that was coming. Portlaoise have enjoyed great underage success at underage level and have contested three Laois senior finals.

But Sarsfields have dominated the Laois club scene for the last decade and this year were going for a record eighth title in a row.

Portlaoise beat Sarsfields for the first time ever in the group stages and repeated the trick in the final. An early goal from Aisling Kehoe set them on their way and they led from start to finish to claim a famous success.

They later beat St Ryanagh’s of Offaly – and have a Leinster club final against Foxrock-Cabinteely to look forward to in 2021.

Not the highest scoring game on the list, but certainly one of the most exciting.

A strong finish from Shanahoe was the difference in Portarlington back in September as they scored the last four points of the game to pip Park-Ratheniska at the post.

Led by Mary Griffin, formerly Kirwan, the 2006 senior champions are back at the top table following a dramatic affair.

Park-Ratheniska, who are playing without the injured Erone Fitzpatrick this year, must’ve thought they had the game won with seven minutes of normal time to play when sub Aoife Daly kicked them three points clear.

But they lost Aoidean Delaney and Trish Fogarty to sin bins in the closing stages. While Shanahoe also lost Jeanne de Tootquet to the same fate, that only happened in the second last minute of the half and the numerical advantage Shanahoe had allowed them to draw level at that point.

Delaney returned in injury time to leave it 14 on 14 for the six minutes of that where Mary Griffin kicked what would prove to be the winner.

Park-Ratheniska had a late chance to force but Anna Healy’s shot hit the upright and the rebound was blocked as Shanahoe held on.

Portlaoise’s eight year wait for a Minor title goes on as Ballyroan-Abbey stunned them in the final quarter to claim their second crown in three years back in September.

Their 47-year minor famine was ended in 2017 and they did it again as they won a game, that was extremely close for 45 minutes, in some style.

Portlaoise dominated possession for large portions of the game but they failed to turn that dominance of the ball into scores and that ultimately cost them in the end.

Ballyroan-Abbey scored 2-3 without reply in the final 15 minutes and that would be enough to do the trick.

SEE ALSO – Check out the 2020 Remembered series on LaoisToday