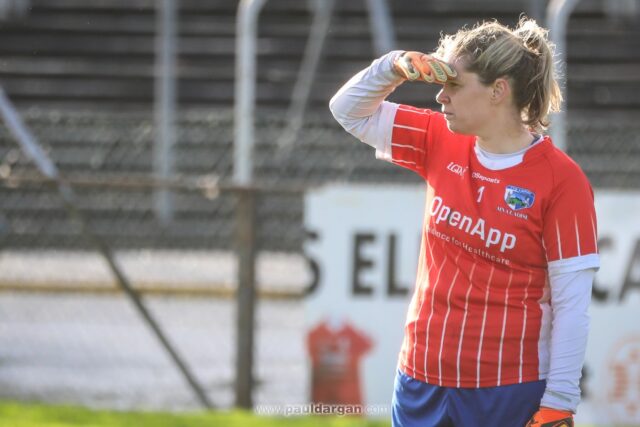 Laois ladies football goalkeeper Eimear Barry has committed to the inter-county scene for another season.

The Shanahoe ladies player is considered something of a late comer to the county game – making her championship debut for Laois more than 16 years after she made her club debut.

Speaking on the LaoisToday Talking Sport Podcast recently, Barry explained how she was previously part of the Laois panel in the late 2000s but didn’t play.

She said: “I was involved when Joe Higgins was over Laois – about ten years ago – and I deputised to Ciamh Dollard.

“Donie Brennan rang me after the county final to see if I would go in and I said that if he thought I had something to offer, I would go and try.

“No matter what age you are, it is an honour to play for your county and that is how I looked at it.

“It is important that we try to get Laois back up to the senior grade.

“So I’ll be joining the panel again whenever it all gets going again.”

Looking back at last year, Barry explained how sweet Shanahoe’s intermediate championship win was after they had struggled for form in the early part of the year.

She said: “This year was sweet because expectations weren’t high due to our early championship form which wasn’t great.

“We struggled to beat Clonaslee and we lost to St Joseph’s, Ballyroan and Park-Ratheniska. We didn’t just lose, we got hammered in those games.

“But the management kept telling us that the semi finals was where we needed to peak and we did that against Ballyroan – beating them by six.

“We were missing six starters and three subs from the team that won the championship in 2018 so we were really up against it in the final against Park-Ratheniska.

“But the team spirit among us is great and we worked hard all year and that paid off in the final.

“And then when Mary Kirwan gets a free five minutes into injury time in front of the posts, almost 20 years on from the All-Ireland win, you just knew she would do it.”