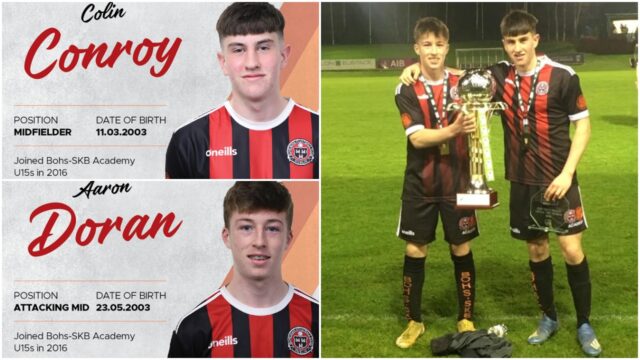 League of Ireland Premier Division club Bohemians have confirmed that eight Bohs-St Kevin’s Boys academy graduates have signed professional terms with the first team – and two of them are from Laois.

Colin and Aaron were part of Derek Pender’s Bohs-SKB U17 league-winning side last season.

And also played in the U-19 league final where they were beaten in extra time by St Pat’s.

The teenagers, who are fifth year students in Portlaoise CBS, joined Bohemians-St Kevin’s Boys in 2016 from Portlaoise AFC.

Derek Pender, club captain for four seasons until the end of 2019, has now taken on a new first-team role as academy transition coach and has been working closely with the Bohs-SKB Academy graduates once more in pre-season training.

He said: “I am delighted that we can announce eight of last year’s Bohs-SKB U17s team signing on professional contracts.

“The goal for these lads will be to try and emulate the likes of Dawson Devoy, Ross Tierney and Andy Lyons, and try to force their way into our first-team squad this season and seasons beyond.”

Bohs achieved our highest league finish in a decade last season with the then 21st youngest top flight team in Europe and the youngest side in the SSE Airtricity League with an average age on the pitch of 23.4 years old.

Bohs-SKB Academy Head of Goalkeeping Shane Supple added: “It is testament to the club and St Kevin’s Boys and the work they have done over a number of years in partnership.

“The clubs are renowned for producing players and for giving young players their chance in the first team under Keith Long and Trevor Croly.

“So many lads have come through and have been given opportunities – the likes of Warren O’Hora, Danny Grant and Evan Ferguson.

“Keith is prepared to throw young players in if they are good enough.”