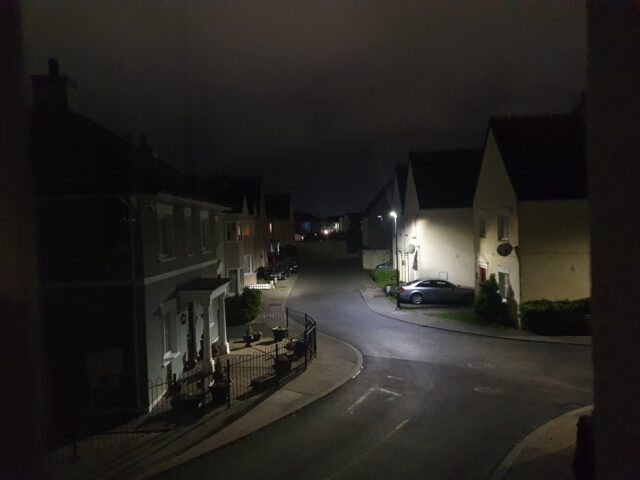 She made the comment at a recent meeting of the Portlaoise Municipal District where she brought up the ongoing issues associated with the new LED lights.

She called on Laois County Council to ‘improve the public lighting in Esker Hills and Fairgreen immediately’.

LED lights are being erected across the county by Laois County Council as they are more energy efficient than the old halogen bulbs.

This process has already taken place in Esker Hills – but as we reported recently, it has led to large swathes of the estate being left in complete darkness.

At a presentation in December, Laois County Councillors in the Portlaoise area were told by Council engineer Farhan Nasiem, 40% of the 2,563 public lights in Portlaoise will be irreplaceable in the next 12 months as the fittings for them are no longer being made.

And according to Mr Nasiem back in December, these LED lights take a targeted approach to fully illuminate the street and footpath.

But this loss of light has left residents of the aforementioned Esker Hills and Fairgreen estates very unhappy.

In reply to Cllr Dwane-Stanley, Engineer Adrian Barrett said: “Fairgreen has experienced an issue with the height and location of existing poles and they did not light the area as required.

“To improve the lighting levels in Fairgreen, new fittings have been installed on one section of road.

“We are in process of verifying lighting levels at this location, it is planned to replace all other lights in Fairgreen after verification of improved lighting levels with new fittings has taken place.

“Esker Hills LED lighting achieves the required lighting levels which is in compliance with P4 in line with BS5489_2020.

“We have met with the elected members and residents in Esker Hills and identified 2 locations where additional poles were agreed and the Councils public lighting contractor are in the process of installing 2 infill lighting columns at these locations.

“It was also agreed that trees will be trimmed where they are obstructing Street lights. There are areas where there were no poles and were never lit, these locations do not form part of the LED upgrade works.”

Cllr Dwane Stanley welcomed the update on Fairgreen, but appealed for more to be done in Esker Hills.

“Cars are being damaged and people who own them can’t see what is happening because it is so dark.

“What are we supposed to say to people who don’t feel safe?”

Supporting Cllr Dwane-Stanley, Cllr Thomasina Connell said: “The level of lightening from the new LEDs has to be the same as what it was.

“I was walking home one night after 10 and I felt nervous because it was so dark.”