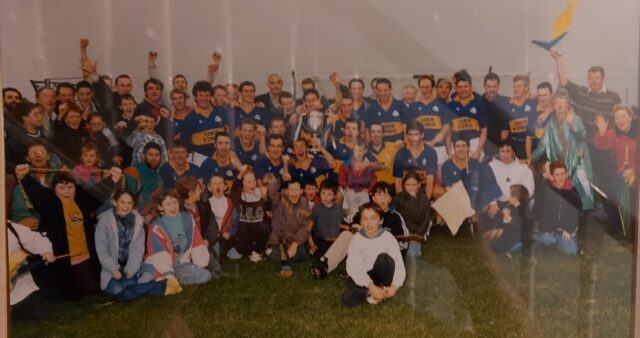 The 1996 Laois JHC ‘A’ final threw up a novel pairing and a local derby all in one.

Colt, who had won the intermediate title three times in the previous 30 years, were back in the junior ranks in mid 1990s and when they reached the final it was an up and coming Trumera side that were waiting for them.

Trumera had won the Junior ‘B’ title – their first ever adult championship success – in 1991 and in 1996 they were set to embark on an incredibly busy decade, one that would see them play in seven county finals in nine years.

To get to the final, Colt had beaten Kyle and Shanahoe while Trumera needed a replay to get the better of Timahoe in the opening round before then firing 6-13 past Rathdowney in the semi-final.

The final, however, on the last Saturday in September wouldn’t see anything like 6-13 being scored. Instead the sides drew 1-4 apiece in a nerve-ridden affair.

Things were much better when they met in the replay two weeks later.

On this occasion Trumera raced into an early 1-4 to 1-0 lead, the bulk of their scores coming from a young Joe Coogan.

But Colt steadied themselves and as well as Richard Mulhall’s early goal, Bosco Grant also hit the net – from a long-range free that deceived the Trumera rearguard – to lead 2-3 to 1-5 at half time.

“This was the score that signalled the end for Trumera,” reported the Leinster Express in the following week’s edition.

“In truth they never gave up but their cause was lost.”

After the game county board chairman Tom Hassett presented the cup to Colt captain John Sinnott amid scenes of great jubilation.

Trumera would return the following year to beat Shanahoe in the final before losing intermediate finals in 1998, 1999, 2001 and 2003. They finally got over the line in 2004 when they turned the tables on Colt and went senior for the first time in their history.