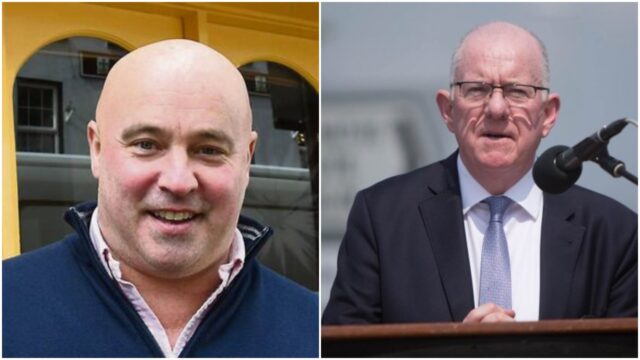 Laois TD and former Minister for Justice Charlie Flanagan has thrown his support behind calls for the hospitality to fully reopen on June 2 – one month earlier than planned.

A group of restaurants and cafés, led by Kerry chef Paul Treyvaud, are calling on the Government to allow a full re-opening on the same date that restrictions on hotels and guest houses will be lifted.

Under the current plans, restaurants and bars can resume outdoor services with small groups from June 7.

There is no resumption date set for indoor hospitality, except for overnight guests/residents of hotels, but it is understood that the government intend for this to happen in July.

A campaign on social media, known as ‘The Plan’, is asking people to send a letter to their local TDs on the “devastating impact” the severe restrictions are having on the hospitality sector.

It relates to a piece of legislation, due for renewal next month, which would extend powers related to the emergency health measures.

Taking to Twitter this morning, Laois TD Charlie Flanagan, a member of the government, signalled his support.

He said: “I’m backing #THEPLAN and ⁦Paul Treyvaud⁩. Makes sense, carefully thought out and will of course have full regard to Public health.

“(It is) incongruous and unfair to treat Hotel dining room differently to Restaurant dining room.”

Speaking on NewsTalk Breakfast, Mr Treyvaud explained what he is hoping to see.

He said: “What we’re calling on is every single TD, every Senator, every Councillor … is to not vote in favour of renewing this.

“The consequences if they do is that come next October/November/December, the tourism industry is going to be absolutely wiped out and decimated.

“We had no winter season, we’ve had no spring season, we’re going to have a very limited summer season”.

“What the whole concept of The Plan is we are looking to unite tourism of all its sectors – which is hotels, bars, restaurants, cafés, everything – to be opened up on the 2nd of June, the same as hotels, to do the exact same under the same guidelines as to what they’re allowing hotels to do.

“If this doesn’t happen, particularly in rural Ireland, but it’s happening everywhere across the country at the moment.

“The hotels – and don’t get me wrong, I’m delighted they’re allowed to open up on the 2nd of June – we just want to be able to do the same.

“The hotels are going to hoover up all the staff from an already decimated sector, that there’s literally no staff around at the moment”.

“The ball is firmly in the court of the politicians now – we have given out a very comprehensive reasoning and argument as to why they should allow us to open up.

“It is now down to them.

“If they refuse to vote, and if they refuse to not continue the legislation, I don’t want to be in position to turn around next October/November/December and say ‘We told you so’.”

The only difference between success and failure is ACTION.

Here’s the link for the letter to send to all of your TDS. Send one to all your local TDS & even better if all your family do the same. We need everyone to support this #ThePlan https://t.co/xsjrTsE7Ym pic.twitter.com/bg5NcLGQ5c