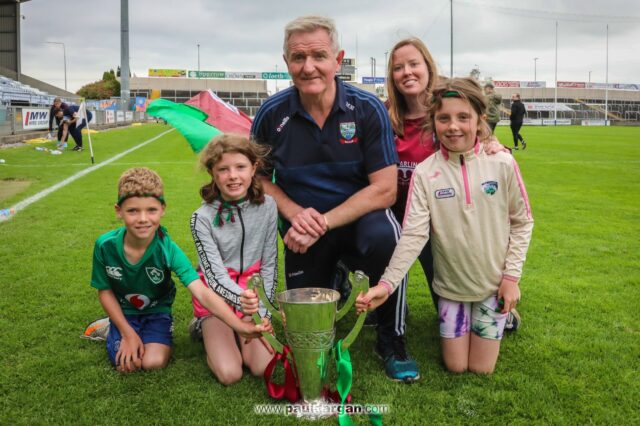 Portarlington manager Martin Murphy has heralded his side’s ability to bounce back from 2019 disappointment to claim 2020 SFC glory on Sunday.

In the 2019 semi final, which is almost two years ago now, Portarlington had led by six points at half time but Portlaoise stormed back in the second half to lead by two.

Port fought back again to take the lead only for a Brian McCormack point, which brought his tally to 1-6, level the sides again.

Then, in the sixth minute of injury time, Gareth Dillon popped up with the winner and Damon Larkin made sure of it a couple of minutes later.

Portarlington felt aggrieved that day as they felt some big decisions went against them – but speaking after the final yesterday, manager Murphy said the players used that loss as motivation to come and win this time.

He said: “This team is two years in the making. I honestly believe and I’d say a lot of people in the public would say that we should have beaten Portlaoise here, back in 2019, but for some silly reasons.

“I think that this team could in fact be going for three in a row at this stage and probably should be.

“They didn’t perform to what they should have done, and we were a bit unlucky against Portlaoise in the semi-final in 2019.

“We circled the wagons a little bit afterwards, we came back, and we said, ‘look it, that’s not going to ever happen to us again’.

“So, we pushed it out to as far as we could today and I think, in fairness, the performance shows that those lads had it in them all along to do this.

“Hopefully now, after the next week or so, we’ll get back into the championship fever again, and we’ll be ready for 2021.”

This was Martin Murphy’s third Laois championship to win – and all three victories have come in different decades.

And while the Stradbally wins were something of a smash and grab, he says it was nice to win one in an easier way this time.

He said: “Maybe I’m a bit fortuitous, I don’t know. Maybe I end up with a team that has a good batch of players.

“I think in fairness, the tag of having won it with Stradbally alone sat heavily for the last few years. Having been with other clubs and other teams, and not having won a championship, this dispels all that now.

“I’m delighted today that we actually won well. The two Stradbally county final were tight, and it wasn’t good for the heart.”

Portarlington made history before when they won two championships in the one year – something Murphy will be hoping to replicate in a few months time.

He said: “I believe we’re back in action next weekend. I think we’re fixed to play the Division 1 league final.

“I don’t know what way that’s going to be. I’d be hoping, maybe, we could get an extra day or two on that. That’ll be down to Portlaoise, I’m sure.

“Joe O’Dwyer keeps telling me that (winning the two championships).

“Look it, we’ll take this one, we’ll go home, and we’ll enjoy it. We’ll see what happens. I’m sure the Portlaoise’s, the Graiguecullen’s, the St Joseph’s and the Stradbally’s of this world will be coming back down and they’ll be taking pot shots at us because we’re at the top.

“If I’ve learned anything, it’s not to take anything for granted when you’re involved in football management. We’ll just enjoy this, and we’ll live in the moment.”