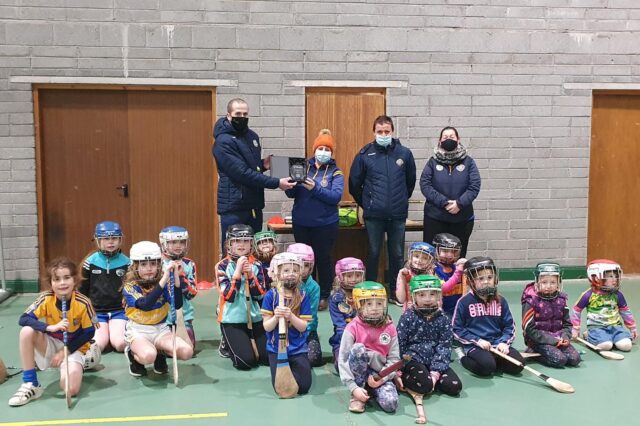 Clough-Ballacolla Camogie club was one of just four clubs nationwide to be selected to take part in a brand new Club Development Award initiative.

Over the entire club season the committee, coaches and three young players (Clodagh Duggan, Tírna Bergin and Kate Brennan) took on the role of PR-Óg’s.

They have been working together to complete different tasks, working on things such as social media, training plans and coach training.

All the work carried out was documented, recorded and submitted to achieve the award.

As well as the beautiful personalised crystal award, Clough-Ballacolla received training equipment to the value of €200, coaching sessions and access to coach workshops.

Medals were presented to all their super stars in the making that attended on the night and they enjoyed a fun camogie session with Liam Clancy.

She said: “The club is extremely thankful to the Camogie Association for the opportunity to participate in the initiative.

“Clough-Ballacolla camogie club was only established in 2016 has grown exponentially over the few years.

“The club used the initiative to achieve as much as possible for our young club and tried especially to do all that was possible to benefit the girls that play camogie with the club both now and into the future.

“A huge thank you to each and every person who has helped to get the club as far as it has to date with mentors, sponsors, the camogie club committee.

“The interest enthusiasm and willingness of volunteers to help has been amazing.

“The club’s AGM takes place on December 5 in the Community Hall in Ballacolla at 6pm.