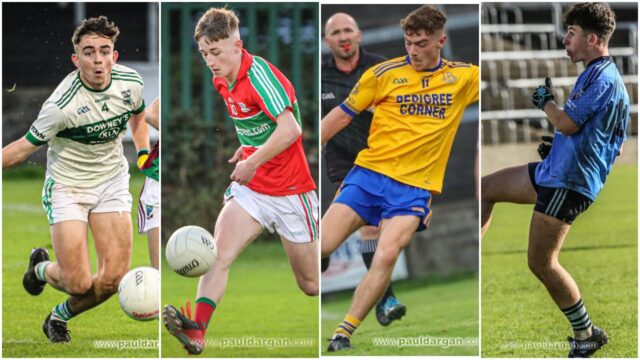 The Laois U-20 football finalists will be known this evening as both semi finals are down for decision tonight.

The Centre of Excellence is the venue as Graiguecullen, Portlaoise, Ballyroan-Abbey and St Joseph’s are set to do battle.

Both games throw in at 7.30pm and we will preview them both below:

Favourites Ballyroan-Abbey, who won the minor grade in 2018, take on St Joseph’s.

Once again, both of these teams enjoyed big wins in their quarter final encounters.

St Joseph’s took on Park-Ratheniska-Spink where they scored four goals in the first half of the game to win the match.

They contain an array of former and current Laois U-20 and minors.

Corresponding minor champions in 2018, as well as in 2020, Ballyroan-Abbey bring a strong team into this grade.

Three weeks ago, they thumped Courtwood-Emo by 11-12 to 5-1 to get their campaign off to the perfect start.

In the meantime, several members of the team won the U-20 ‘A’ hurling title against The Harps at the weekend.

Ballyroan-Abbey haven’t been in an U-20/U-21 final since 1983 but you’d fancy them to end that drought this evening.

This game has now been postponed and will take place on Sunday morning at 11.30am in Stradbally instead.

Both of these have advanced to this stage following fairly comfortable quarter final victories.

Portlaoise, who were eliminated in the group phase of the corresponding minor championship in 2018, were six point winners over Stradbally Parish Gaels.

They were 2-13 to 2-7 winners and fielded nine players who played senior championship this year.

Eddie Critchley and Niall Carey were with the Laois U-20 hurlers while Colin McEvoy and Kieran O’Donnell represented the Laois minor footballers.

Graiguecullen were actually in the ‘B’ at minor level three years ago where a Conor Kelly masterclass led them past a gutsy Clonaslee-St Manman’s.

But the change in their panel since then has been incredible with only Craig Doyle, Cillian O’Reilly, Aaron Cullen, Oisin O’Reilly, Conor Holohan, Lee Nolan and Conor Kelly starting in the win over Portarlington from the successful 2018 side.

Sean McGrath, Aaron Dorgan, Mikee Horohan, Conor Harte, Jack Byrne, Naoise Brennan and John O’Shea were all on the Graiguecullen minor team who won the ‘A’ championship earlier this year and have seamlessly moved on to this level.

Portarlington reached the 2018 minor final where they only lost out to Ballyroan-Abbey following a replay – so Graiguecullen’s 2-12 to 0-5 win was very impressive.

This one is extremely hard to call and extra time cannot be ruled out.