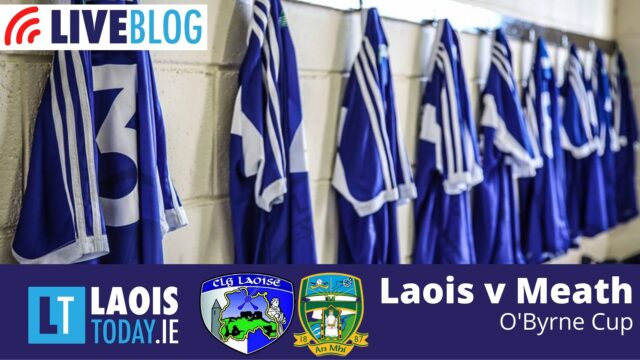 It might still be January and the depths of winter, but there’s always something enjoyable about midweek GAA action.

Tonight in Stradbally the Laois footballers take on Meath in the second round of the O’Byrne Cup.

It’s a short turnaround for Laois from Saturday’s 6-10 to 0-13 loss to Wexford but the pre-season competition is played in a condensed format with the three group games in seven days.

Laois manager Billy Sheehan has named a relatively strong side for tonight’s game with Graiguecullen goalkeeper Danny Bolger the only debutant.

Portarlington’s Alex Mohan makes his first start though he was introduced at half time of Saturday’s loss to Wexford.

There is a first appearance of the year for last year’s captain Kieran Lillis at midfield and for Paul Kingston at centre-forward.

For Meath, it’s their first competitive game of 2022 as their opening clash with Wicklow scheduled for last Saturday was postponed because of Covid cases in the Wicklow camp.

Manager Andy McEntee survived a vote back in October to retain his job – with the county executive voting against him but the clubs supporting him.

He is now entering his sixth season in charge and will be seeking to build on last year’s positive performance against Dublin in the Leinster semi-final by gaining promotion from Division 2 of this year’s league.

The game throws in at 7.30pm and we’ll have updates throughout the evening.