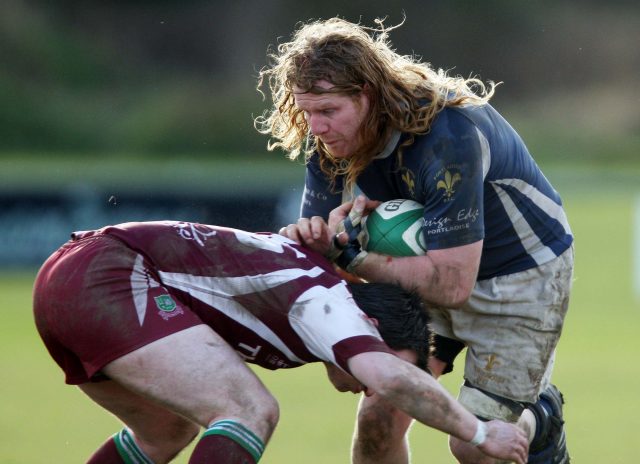 It’s a dirty aul day out there today but that shouldn’t deter a large crowd showing up in Portarlington Rugby Club this afternoon for the biggest local sporting occasion of the weekend as the county’s two rugby clubs go head to head in the opening round of the Leinster Rugby Towns Cup.

For local club rugby, this is as big as it gets. Midlands 103 are broadcasting live from the ground and Leinster Branch officials will be in attendance to make the draw for the second round in the clubhouse immediately afterwards.

It’ll be only their third meeting in the long history of the competition with the two previous clashes taking place in a storm of controversy 14 years ago.

In 2003 they met in the first round in Togher when Portarlington won 24-23. Mark Petriw and Ross Doyle got their tries on that occasion while Brian Smith added 14 points from the kicking tee. For Portlaoise Colm Casey, Mark Delaney and Ian Galbraith touched down with the remainder coming from the boot of Alan Kingsley.

For Port, the win set up a second round meeting with Gorey. Or so they thought.

A couple of days later it emerged that Port’s second row – South African Johan Burger – hadn’t been registered in time. The drama was only starting.

The Leinster Branch ordered that the match be replayed back at Togher again. Port mooted the idea of not fulfilling the fixture at all but opted against that and went back to Portlaoise two weeks after the original game. It was a cup classic.

At one stage Portlaoise were 14-3 up thanks to a try from Mickey Fennelly and Kinglsey’s accuracy. Then Port went 17-14 up after tries from Pat Cooper and Patsy Lawlor. Two Kingsley penalties edged Portlaoise back in front again but Brian Smith held his nerve to send it to extra time. There both sides had chances to win it and when it looked destined for a replay, Kingsley landed the winning penalty in injury time. 23-20 to Portlaoise it finished.

After the game the Port players left Togher as they had arrived, fully togged out. The bad feeling between the clubs at the time was palpable.

What happened next? Portlaoise went on and won the cup for only the second time ever. Port were left to ponder what might have been.

Today’s game marks their first cup meeting since. Things have changed a lot for both clubs in the intervening years. Will Sherlock is Portlaoise’s sole survivor from that team while only player-coach Ross Doyle and Mark Petriw remain for Port.

The sides met twice last year in Division 2A of the Leinster League with Portlaoise winning both games en route to winning the title. Neither outfit have set the world alight in this year’s league and both are in relegation bother with two games remaining – Portlaoise in 1B and Port in 2A.

Both lost their league clashes last weekend – Portlaoise away to Mullingar and Port at home to Edenderry – and Port have lost all three games since the turn of the year.

The home side will look to back rowers Petriw and Robbie Piggott, while centre Stephen Mulhall was once a Youth international and a former member of the Leinster Academy. Jason Moore, Eugene Nolan and Doyle all carry a threat.

For Portlaoise, the experienced Shane Reilly, Jack Kavanagh and the Sherlock brothers – Mark and Will – bring massive experience up front while Number 8 Robin Foot is highly-rated too.

In the back line, New Zealand native Logan Nicholson has impressed at outhalf since his arrival with Gavin Thompson and John Scully offering class further out.

Home advantage is a boost for Port but Portlaoise have the benefit of playing a division higher all season and a better line of form.

We can hardly expect a saga like the last time but the visitors might just shade it.