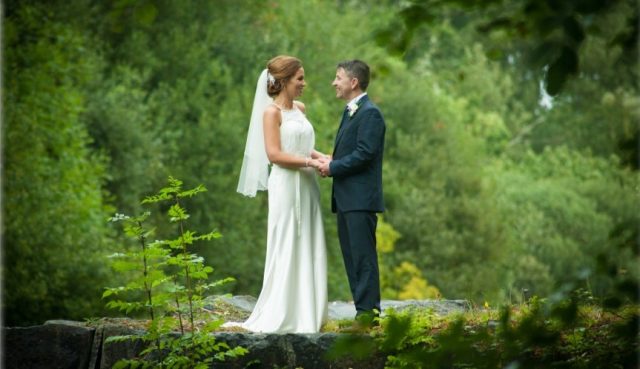 Portlaoise couple Mary Gallagher and Liam Phelan – who tied the knot on August 19 last year – are the first to feature on ‘Our Wedding Story’.

Mary from Ballycarroll, near the Rock of Dunamaise, and Liam, a native of Clonreher, met in the Foundry Night Club in Carlow.

“The proposal took place when Liam treated me to a weekend away in Castle Dargan resort, Co Sligo, where he got down on one knee,” she adds.

They got married in The Church of the Assumption, The Heath, with the reception afterwards for 210 guests in The Lyrath Estate Hotel, Kilkenny.

Mary lived in Galway for 16 years before relocating back home last April. She then took a managerial position in Bemis Healthcare Packaging. Liam is a self-employed plumber, working locally.

Mary and Liam are living in Ballyfin while the construction of their new home in Cappagh North is underway. “We are hoping the big move will take place in early April,” says Mary.

Hair: The Company, Portlaoise, with the bride’s tresses tended to by Kevin Hogan.

What you drank: Moet for the day that was in it. The wine was Santa Rita 120.

The cake: A three-tier confection of fruit, chocolate biscuit and lemon drizzle.

First dance song: Ed Sheeran, ‘Thinking Out Loud.’ “However, Picture This’ ‘Take My Hand’ is one song that will always remind us of our big day,” Mary says

Videography: Brendan Brophy. “A great team that captured every moment of our big day perfectly and made us feel at ease throughout,” Mary says.

Best memory: “There were so many amazing memories, it’s hard to pick out one,” reflects Mary. “Meeting each other at the top of the aisle has to be the best moment of the day,” she recalls. “The crowd’s reaction to the singing chef entertainment during the meal was hilarious. And as for the dance floor it was so much fun – we were both on cloud nine and didn’t want the day to end.”

If you got married recently and would like to see your Wedding Story feature on LaoisToday, then please get in touch. Email news@laoistoday.ie.