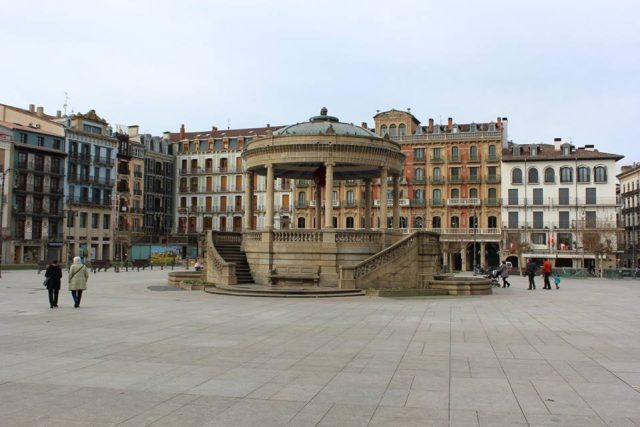 About one year ago I made the decision to spend a semester abroad in Pamplona, Spain, as part of the Erasmus+ programme.

This involves studying abroad for one semester or one full college year before completing your studies at home. It’s something that I always wanted to do, but as the time grew nearer, I got more and more apprehensive.

Suddenly it was the night before I had to leave, and I felt this numb and anxious feeling. I was trapped. I had no choice but to go because it is a compulsory part of my degree. It felt like I was being shipped off to war.

Now I’m writing this one month into my five-month semester abroad at the Universidad de Navarra and I couldn’t be happier. I’ve met lots of great people, tried out new things like skiing, and I’ve adapted to the Spanish culture. I can’t believe that a month ago I was trudging a suitcase that I could barely even lift through Dublin airport, completely unaware of what the next five months of my life would be like.

(A word of advice – a weighing scales is not an accurate way of weighing your suitcase. My ‘twenty’ kg suitcase turned out to be 28kg and cost me an extra €80 at the airport – not a good starting point!)

My main worry was that I wouldn’t make any friends, but that worry was quickly erased by the wonderful international committee in Universidad de Navarra, who organised several events and meet-ups for us. Within the first week I was teaching international students from all over the world to say “what’s the craic” and “up the sesh!”

One of the best things about Erasmus is that you get to meet so many different kinds of people and learn about their cultures, but one thing that surprised me is how little people know about our wonderful little island.

Now, everybody knows about the Irish stereotype of being super friendly and fond of their alcohol, so I was always greeted with enthusiasm when I told people that I was Irish. It’s what happened next that shocked me…

“So is it true that Ireland want to have a referendum to leave the UK after Brexit?”

“Wow, your English is brilliant considering it’s not your first language.”

“What part of Ireland are you from? Wait, there is a difference between the republic and the north?”

“So I guess you don’t find it cold here since Ireland is minus temperatures and covered in ice and snow?”

I’ve lost count how many times I’ve had to explain that Ireland is not part of the UK, nor is the weather on par with that of Iceland. (Yes, I’m sure that they are not the same country).

Initially, the many cultural differences between Spain and Ireland took a lot of getting used to – the most obvious difference being the language barrier. While I do speak some Spanish, I am far from fluent.

Still, it’s surprising how much Spanish I can pretend to know by using the words ‘sí’ (yes), ‘gracias’ (thank you), ‘por favor’ (please) and, my most used verb, ‘yo quiero’ (I want). However that false act only lasts for about 30 seconds.

One of my first days here I ordered what I thought was a plate of chips by saying: “Quiero un plato de patatas fritas por favour”, to which the bartender replied: “Chips?” I nodded, delighted with myself that he had understood me. I was however less delighted when he returned with a plate, with a bag of crisps placed on top of it. I forgot that every non-native English speaker learns American English, rather than UK English.

While the initial adjustment period has had its up and downs (along with many humorous misunderstandings), I’m settled in now and I’m really looking forward to the next four months.

I’m really enjoying my classes, the mild weather, the friendly people (both national and international), and especially the super cheap cost of living out here!

It’s filled with lovely parks and buildings and surrounded by a mountainous landscape that is far beyond those that I’ve seen in Ireland.

Like many European cities, it is split into a new town and a beautiful old town. I’m confident that I made the right choice in coming here, and I really am loving La vida Española!