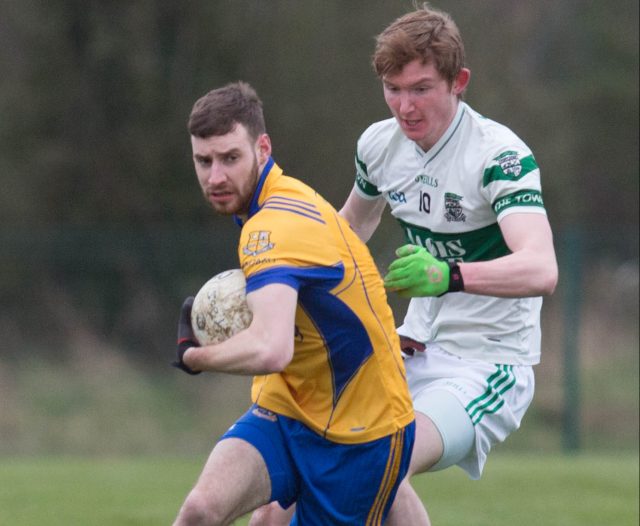 St Joseph’s made it five straight wins in the ACFL Division 1A as they overcame a numerical disadvantage to beat Portlaoise in Rathleague tonight.

The Kellyville outfit lost Jason Campion as we entered the final quarter in a bizarre incident which saw him receive two yellow cards from referee John Flynn seconds apart for verbals.

They led by just a point at that stage but they kicked on and won by five in the end to maintain their position at the summit of the division.

St Joseph’s played with the breeze in the first half and they began the scoring with cousins Matty and Jason Campion raising a white flag each thanks to successful efforts from long range.

But Portlaoise responded with the next four points with a brace apiece from Paul Cahillane and Scott Lawless to move ahead at the midpoint of the half.

St Joseph’s responded through Matty Campion but they couldn’t handle the movement of Lawless and Cahillane in the Portlaoise full forward line and between the pair they took Portlaoise’s tally to eight points by half time.

St Joseph’s reeled off three crucial points in the closing moments of the half with Michael Keogh kicking two and Jason Campion another to leave them trailing by 0-8 to 0-6 at the break.

The visitors introduced Adam Campion at half time and they kicked the first three points of the half to retake the lead.

Jason Campion and Danny Hickey kicked points from play while Michael Keogh slotted his second free and things looked to be going well for St Joseph’s until they lost Jason Campion to that red card.

But they didn’t panic and instead, they struck for the game’s only goal. Matty Campion’s inswinging ball caused chaos in the square and substitute Brian Mulligan was adjudged to have handled the ball on the ground.

Matty Campion sent substitute keeper Graham Brody to wrong way from the spot and when Dan Dunne added a 45 moments later, there was five points between the teams with 14 minutes to play.

Portlaoise went in search of goals to get them back in the game and they were desperately unlucky not to get one when Scott Lawless’s thunderbolt rebounded back off the crossbar.

It took Portlaoise 24 minutes to score in the second half – that coming from Lawless from distance – but when Ronan Molloy popped up from corner back with another, there was four between them with five to play.

However, St Joseph’s maintained their composure and Dan Dunne kicked a late win to maintain their 100% start to league football in 2017.