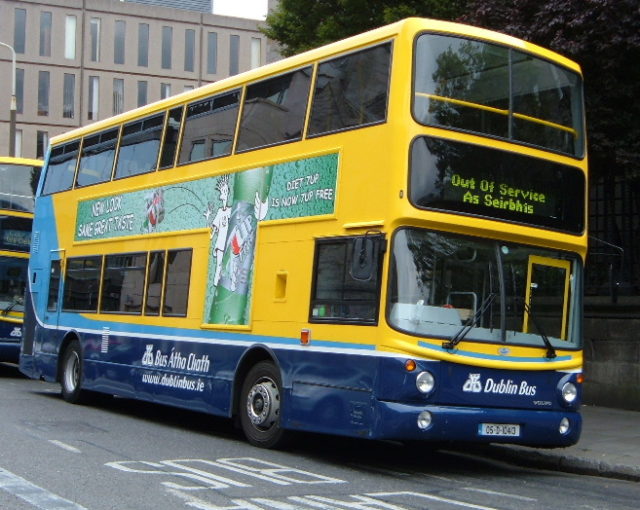 Dublin. The very mention of the place can send a lot of us simple, country, culchie folk into a cold sweat.

We can’t avoid it. It’s our capital city, it’s up the road and it towers over us in so many ways. Everything about Dublin – the traffic, the one-way system, their county football and hurling teams, the people even – put us on edge.

To acknowledge that we’ve put together the list of Dublin things that get to us the most.

Driving in or to Dublin

How many times will you hear “he/she won’t drive in Dublin”. You’d swear it was Bangkok.

But whatever it is, people from the country can’t seem to hack it at all. The endless traffic lights, flyovers and the constantly-changing one-way systems seem to scare the shite out of us altogether.

And that’s without even mentioning the M50 at all. Some would rather chance getting a rocket to the moon than driving to or in Dublin. It beggars belief.

Public transport in Dublin is another thing that seems to get the better of us. In the bid to avoid driving in Dublin, some will chance their arm on the train.

But the fragmented transport system can cause fierce problems. The Luas is one thing but Dublin Bus is a different beast entirely. Figuring out where to get on and off and what side you need to be on can cause incredible stress.  And then there’s the whole issue of learning the various bus numbers and where they might take you. The 11A won’t take you where the 11 does, is one of countless examples.

Students going to Dublin to college for the first time can get fierce frazzled by it all. One student one time was told to get on the 1, 2 or 3 bus to get where he needed to go. Naively, he thought the 123 would do him. He was lost for a week. Dublin Bus and all its complexities is something country people will never be fully comfortable with.

The Midlands Regional Hospital in Portlaoise has got a fierce doing over the years but if you want to strike the fear of God into someone (to rob a Paul O’Connell line), the very mention of being sent to Dublin to hospital will nearly finish someone off.

You’ll hear it the whole time. “He was alright until they sent him up to Dublin”; “It’s not good, they’re sending her to Dublin.”

Being in hospital anywhere is never good but Dublin is a different level again. And it’s not good.

Getting to the airport

Just like the issue of driving to, or in, Dublin, getting to the airport is an incredibly onerous task for so many people. “Hardly worth the stress of going somewhere,” you’ll no doubt hear. “You’d be as well off going to Shannon – no bother getting there or with parking.”

Not as bad since the Red Cow Roundabout and Newlands Cross underwent serious transformation but getting to Dublin Airport is still something that does our collective heads in.

There was a time when most Leinster counties fancied a rattle off the Dubs but now they’re on such a level that most counties want to avoid them for as long as they can.

A sign of how damn good they have become was that the entire country was shouting for Kerry in the recent league final.

Their forwards are brilliant, their backs are more prolific than most other counties forwards and they’ve a bench that they’re embarrassed by themselves. They also have a home ground in Croke Park that they rarely have to leave.

“Come. On. You. Boys. In. Blue”; “Hill 16 is Dublin only”; “That means no bloody culchies”; “Alive, Alive Oh.” There’s nothing wrong with standing at a match but you couldn’t be listening to that on Hill 16.

And the problem is there’s so many of them now that you’re safe in no part of the ground. God help us.

Some lad from Dublin

No matter what walk of life you’re in, there will always be “some lad coming down from the head office in Dublin to give a presentation”.

You know the type yourself. A smooth operator, uber confident, raking it in on the mileage and has all the answers to everything. Never warmly received and there’s always a smug satisfaction when someone catches him out on something.

The only thing that goes down worse is “a lad coming over from the UK”.