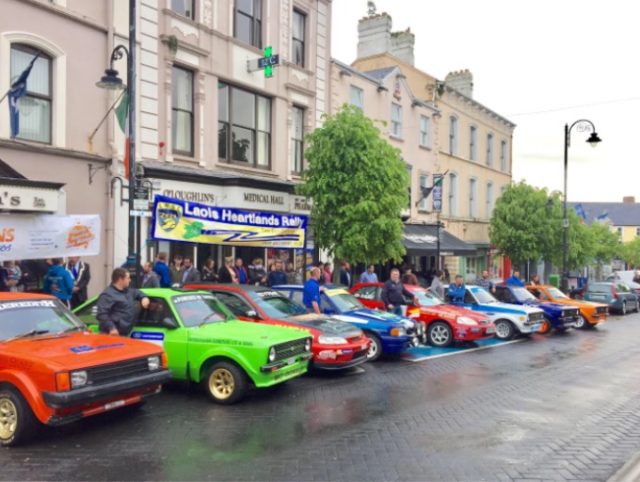 Motoring enthusiasts were well represented in Laois over the weekend with the launch of The Ace Signs Heartlands Rally and the annual Ballyroan Vintage Rally.

O’Loughlins Hotel in Portlaoise hosted the launch of the now annual Heartlands rally. Laois Rallysport Club, now in its 11th year, has successfully run this rally for the last six years.

A selection of competitors cars and supporters lined the Main Street of Portlaoise on Saturday, to launch the Rally for 2017 along with Padraig Fleming on behalf of Laois County Council.

This year’s event is Round 3 of the Midlands East Rally Championships. The rally will take place on Sunday, June 11, and sees competitors battle it out over two stages, run three times. A total of 90 kms of stages will be covered in the rally, around the areas of Derryguile and The Heath. This has become a very well regarded rally, with competitors from all over Ireland and abroad attending.

Last year saw just how competitive the Heartlands rally can be, with just two seconds between the top five drivers. Laois Rallysport Club Chairman, Benny Dowling, is hoping for an equally exciting run this year and was very happy to tell me that Laois County Council will be again providing their facilities at County Hall for centralised scrutiny, pairc feirme and service area for the event.

The roads around Laois are ideal for rallying and there are plenty of good, safe viewing points on the stages for you to have a look or you can head down to county hall if you want to have a closer look at cars.

Meanhwhile on Sunday, Ballyroan Vintage Club held its annual Vintage Rally at the local GAA grounds. Bad weather and Classic cars do not go well together and considering close to an inch of rain fell on Friday, organisers were delighted to see weather improved and a good good turnout on the day.

I met Harry Carter, treasurer of the club and also Mick Murray, the first chairman of the club, who told me that this year was their 27th rally in Ballyroan. There was a good range of cars on show from the the older Morris Cowly built in 1929, alongside, Austins to the more modern, Jaguars, Triumph, VW Beetles, Minis, Porsche and Land Rovers.

There was a good display of vintage tractors on show from Massey Ferguson, Ford, Lanz, Zetor, John Deere and David Brown. Some of the detailed restorations being carried out on Vintage tractors on display in Ballyroan are truly impressive and show the length that enthusiasts are going to, to return machines to near factory condition.

Another well known Laois Classic event to look out for is The Gordon Bennett Rally, which will take place on the June bank holiday weekend from its base at Treacy’s pub.

This runs for the entire weekend and traces the route of the original 1903 race which went through Laois, Kildare and Carlow.