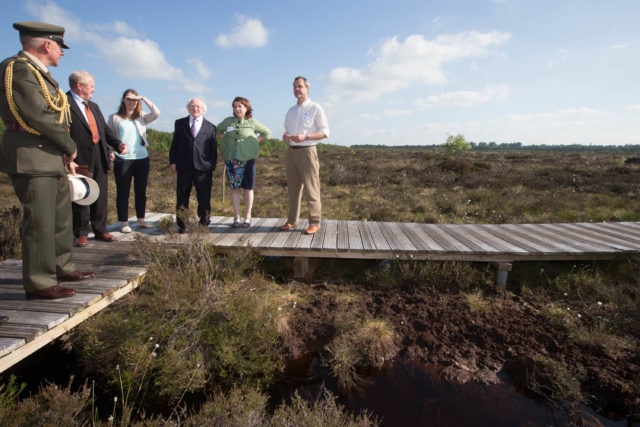 It’s usually back-breaking work that people associate with the bog but Abbeyleix on a beautiful Thursday afternoon yesterday was a different story altogether as President Michael D Higgins visited.

He launched the Irish Wetlands Strategic Plan 2017 to 2020 and spoke at length about the importance of wetlands and bogs, such as the one in Abbeyleix.

He praised the local community in Abbeyleix for its efforts to “restore and reinvigorate Abbeyleix Bog”.

“I look forward to taking a walk later in Abbeyleix Bog to see the fruits of the tremendous community initiative undertaken over the past number of years to restore and reanimate Abbeyleix Bog and its wetland habitat,” he said.

Photographer Alf Harvey was on hand to capture the occasion and these images give an idea of what a great occasion it was – and how beautiful the facility is.

Michael D Higgins in Abbeyleix
1 of 16

Laois woman thanks nurses, doctors, family and friends as she wins 49-day hospital battle with Covid-19

The story of a Laois man, a future Man United flop and a wet night in Waterford

My Club and I

My Club & I: Meet the Clough-Ballacolla woman who is breaking new ground