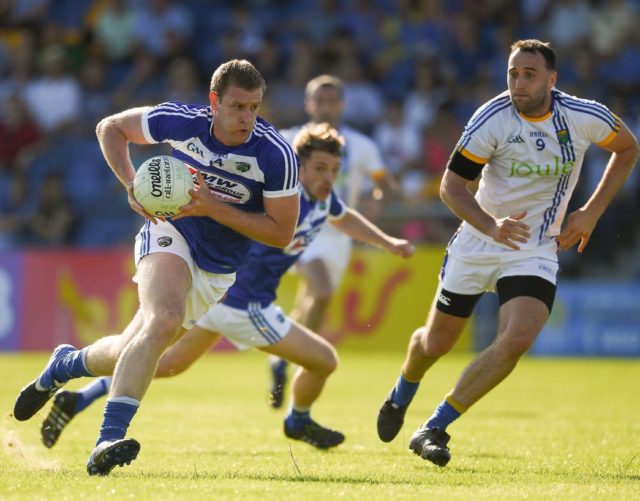 They were made to endure a nervous final few minutes but Laois saw off the challenge of Wicklow in Aughrim on Saturday evening.

We’ve picked out some of the main talking points from an eventful game.

Laois were beaten by 14 points by Kildare the last day out, a hugely disappointing way to go out of the Leinster championship.

And while the management have come in for a lot of criticism, it says a lot that there has been no high-profile defections, no players heading for America or no mad bust ups that generally accompany a loss like the one to Kildare. It all points to a happy camp.

Laois played a couple of practice matches, made a number of changes to the team and while the draw was relatively kind to them, they responded in the best way a team can.

Wicklow weren’t hectic by any means but Laois got well ahead early on and always looked the likely winners. While they endured a scary finish, they had responded well to any Wicklow threat prior to that. They fully deserved the win and can look forward to another day out in two weeks time.

Laois made five changes to the side beaten by Kildare. Injuries forced Niall Donoher and Denis Booth out while James Kelly, Evan O’Carroll and Paul Kingston all dropped out of the starting 15 too.
In total Laois made changes to every line of the field following the Kildare game.

It was great to see Mark Timmons back after a lengthy injury layoff while he was joined in the full-back line by his Graiguecullen club-mate Trevor Collins who was making his senior championship debut.

Captain Stephen Attride returned from injury and David Conway returned to the team after being omitted for the previous two championship games. Gary Walsh made arguably the biggest impression though, scoring 1-3 in the opening half. His goal was a fine effort while he also kicked two brilliant ’45s into a stiff wind. It was strange to see him taken off early in the second half but he will surely start again the next day.

As mentioned above Gary Walsh really took his chance when given his starting role and he was excellent in the opening half, following on from an impressive cameo against Kildare. Donie Kingston delivered once more too. Wicklow moved midfielder Anthony McLoughlin back to mark him but Kingston was again Laois’s go-to man. His goal in the second half was a wonderful take and finish (and a great ball from James Finn too) and it turned out to extremely important in the end.

It now means that Kingston has scored a goal in each of Laois’s last three championship games and with three against Offaly in the final round of the league he has hit six goals in his last four competitive outings for Laois.

4 – A change of preference

Paul Kingston was the star of Laois’s opening round win against Longford when he scored two goals but he didn’t start on this occasion and wasn’t among the six subs used.

Likewise when Brendan Quigley got injured in the first half it was James Finn the management went for and not Kevin Meaney who appeared to have been ahead in that pecking order prior to now. Trevor Collins was preferred to fellow U-21 James Kelly as the management don’t look afraid of changing things up.

Laois were nine points up going into the last couple of minutes but two late Wicklow goals reduced the gap to three and had Laois living on their nerves in the final moments.

There was no doubting that Laois deserved to win but, as has been the case all year, they really need to limit the scoring chances they give away. Laois goalkeeper Graham Brody made at least three good saves while Wicklow took a point on another occasion when a goal was on. The opposition will only get better from now on so Laois can’t be as generous in defence as they have been.

Denis Booth and Niall Donoher missed the game through injury and Brendan Quigley and Evan O’Carroll went off injured on Saturday. Laois will be hoping that all four are back as soon as possible.

SEE ALSO – Who Laois could face in the next round of the Qualifiers?