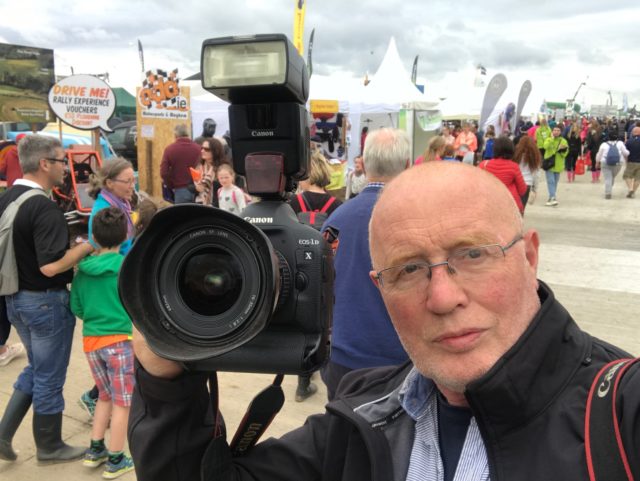 Alf Harvey has been the official photographer for the National Ploughing Association for a number of years and is part of the furniture now no matter what part of the country it goes to.

What better man to feature in our latest ‘Ploughing and I’ feature.

1 – What’s your involvement in/relationship with the Ploughing Championship?

Official photographer to the National Ploughing Association.
Highlight of the year, along with the photography, the friendships, meeting people that you didn’t meet since ‘in the field’ last year, the friends you meet at other ploughing events during the year, that understanding of what it’s all about. A few years back Sean Moncreiff, interviewed me on Newstalk during the ploughing. He asked “How close do I get to the competitors when ploughing”, my natural answer was “Sure shake hands have a word and wish them well”.

When the Ploughing was in Oak Park, Carlow in the 80s, I remember well the crowds, ploughing & walking. That was it, got the ploughing bug!

3 – What’s your favourite thing about the Ploughing?

The ploughing itself, everybody attending should take in some of the competitions. They are generally just over the ditch from the exhibition area. The horse ploughing is fantastic and always attracts great crowds.

4 – What’s the most unusual thing you’ve seen/experienced at the Ploughing?

Not at the ploughing itself but involved: The launch for Mogeely, Midleton, County Cork in 2005. After the usual hospitable welcome and having spotted the beach near us, I asked for the tractor with plough driven by the one and only Dave Mulcahy, Cork East Ploughing NPA director, prize winning ploughman & general great guy from Leamlara, Co. Cork to get it down there, which he duly did. We all gathered for a few pics and as he was dropping the plough onto the sand with a spectacular backdrop, this guy came running from out of nowhere, saying he was a whatever official and we could not plough the beach! As if that was our intention.

Well planned in advance and no days are the same, but basically arrive on site for 10am with a plan in mind and on paper.
Take day 1: Check in to headquarters, get set up, may have a few pics to be taken, then out to the ploughing, get some pics, wait for the President to arrive at a designated plot, capture the meet and greet with the competitors & officials, capture the overall scene. Then onto the Bandstand for the official opening, people, the atmosphere & general banter, speeches and official opening.

Once that’s over, may need to send some pics, but basically the pressure is off and can ramble back out to the ploughing, picking up pics along the way. These pics along with ones from the exhibition area are the ones you see on brochures, NPA WWW & especially their social media where I have access to upload direct to the NPA Facebook page, using phone or from camera.

Then I start on the stands, capturing the colour, crowds, basically anything that will show the fun people have on a visit to the ploughing. This has to be planned to ensure as much as possible of the site is covered in the three days. Jeff Harvey is the expert on the arcades and covers most of them for the NPA. Food usually comes on the run or if in Media room where we are excellently fed, sure throw up a computer, look busy and eat! Nobody will annoy you…thinking “that lad’s busy/under pressure’.

At this stage the day is well advanced the place is full, so crowd shots of the trackways full, usually I drive (with a very rare access all areas vehicle pass) around the edge of the exhibition area and pick off shots. Then back in for more people/stands and may again be processing and sending pics depending on instructions from the NPA. All leading up to 6pm on the bandstand for the winners being announced and pictured, processed and posted to social media.

At this stage it’s time for a cuppa and chill out before heading home to process, caption and generally sort through all the images from the day. Finish 1-2am, a few hours sleep and then back to site for 10am. Do it all over again with a different plan, which may include special visitors at assigned times but the first half if the day is taken up with the ploughing competitions. Similar for the third day.

6 – What one thing would you change about the Ploughing if you could?

I’d introduce a Celebrity Island Ploughing competition, where the celebrities/sports stars would plough off each day and live on site with plough and tractor in a tent overnight, finer points to be set. Example picture The Tullow Tank, Tubridy and Nathan Carter doing that for 3 days. Bet loads similar would be up for it and throw in a charity angle. The experts would work it out.

7 – What are you most looking forward to this year?

Obviously the ploughing where the competition is very hot, as shown with the amount of World and European titles in recent years. Meeting up with old friends in ploughing as well as the photographers/journalists/friends, public in general and enjoying the energy created by the multiple thousands that attend. You could stop for a minute and meet somebody from literally anywhere and strike up a conversation.

8 – Who’s the most famous person you’ve come across?

While many politicians along with TV & Sport stars attend the ploughing there is only one answer, Anna May McHugh.

SEE ALSO – The Ploughing and I: Brendan Greene on nurturing a love for ploughing at a young age