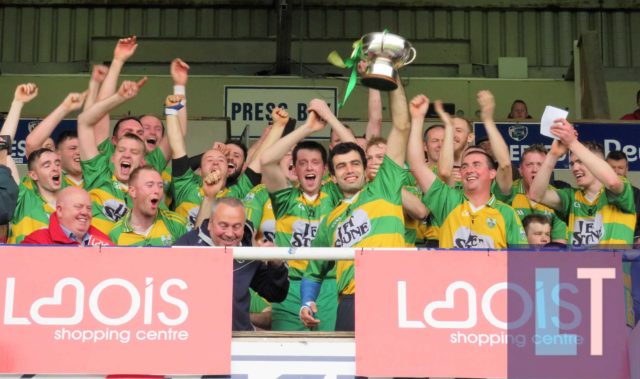 Almost every hurling final in Laois this year has been keenly contested and still on a knife edge going into the final moments.

The Junior ‘A’ hurling final in O’Moore Park was no different with Ballypickas first equalising in the the 61st minute and getting the winner three minutes later, shortly before referee JJ Gorman blew the full-time whistle.

Both scores were landed by Cillian McEvoy, their 19-year-old midfielder. McEvoy had got a straight red card in their semi-final win over Castletown but video evidence cleared him of any wrongdoing and his suspension was lifted just days before the game. He played a major role – scoring three points from play, the last two as well as a very important one just after Rathdowney-Errill’s second goal.

The final whistle sparked joyous scenes as Ballypickas celebrated a first Junior ‘A’ title in 23 years. They had won a Junior ‘B’ back in 2007 – then also the fourth tier – and a special Leinster title in recent years when they went forward as Laois’s representatives but this was the one they craved.

And as captain Liam Lalor – unable to play because of a broken arm – lifted the trophy, Ballypickas supporters young and old let out an almighty cheer.

We were on hand to capture some great photos as the players and club officials were joined by their friends and family – and most importantly the Fr Conn Phelan trophy.