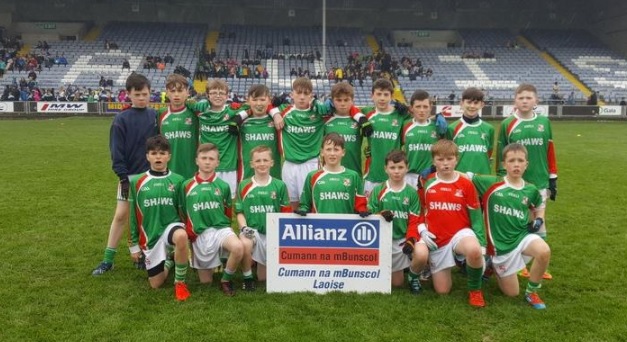 Stradbally may have not won the Senior county final this year but St Colman’s have come away with the Division 2 trophy after this gripping encounter with St Joseph’s NS, Ballyadams.

The two teams played marvellous football in less-than marvellous weather and this final was neck-and-neck right down until Brochan Reilly blew the final whistle.

Mikey Murphy played a huge role for the St Joseph’s side and scored the first of his four points to open the scoring after three minutes.

This was followed by a point from teammate Darragh Farrell and another from Murphy. However, St Joseph’s couldn’t relax just yet. St Colman’s goal came in the form of a sweet right kick from Aaron Foley to leave the sides level after 10 minutes.

Murphy and Deegan added to for the St Joseph’s boys but Annanough man Kevin Fennelly slotted another goal into the back of the net and the sides were left 2-1 to 0-6 in favour of St Colman’s at half-time.

Murphy slotted a high ball between the posts early on but this was to be the last score for the Ballyadams side.

There was only one scores for each of the teams in the second-half, mainly due to the strong defending by both sides.

Ballyadams goalkeeper Callum Delaney put in a display Stephen Cluxton would’ve been proud of in the second-half and held off much of Stradbally’s attacks.

Jake Darcy continued his strong display at centre-field and added another to his tally and despite numerous attacks from St Joseph’s, St Colman’s held off to become Division 2 champions.