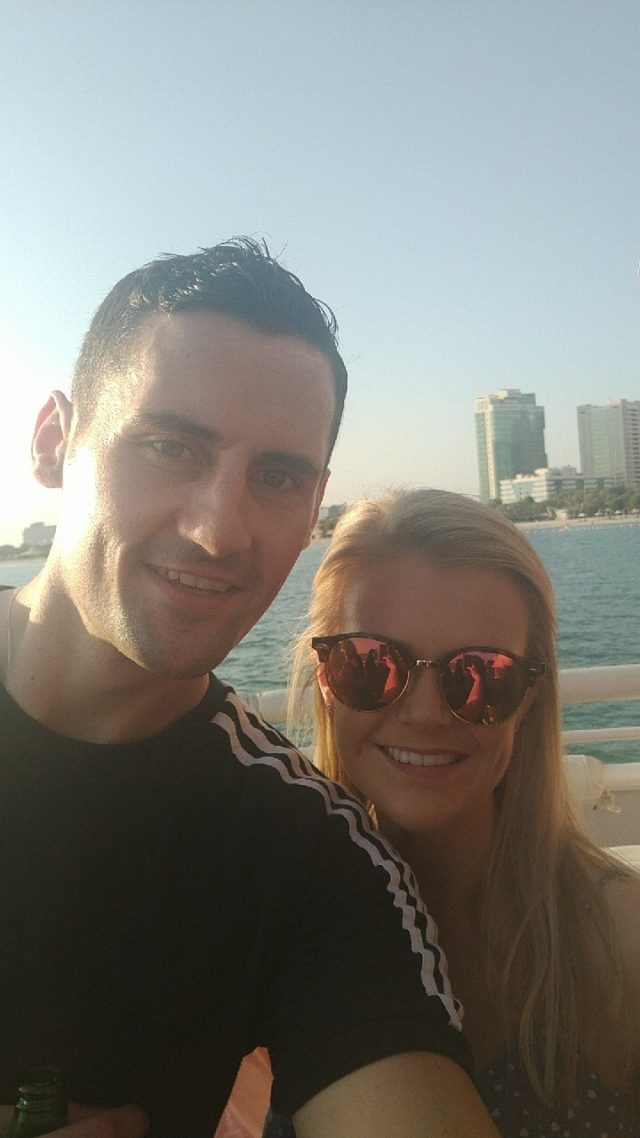 Laois Abroad is a series that focuses on Laois natives who have made travelled or built their lives overseas.

This interview looked at Rachel Williams and James Finn, who moved to Abu Dhabi this September.

If you have an interesting Laois Abroad story, send in your information to news@laoistoday.ie.

Rachel Williams and James Finn began their journey in Abu Dhabi not so long ago and have already immersed themselves to living in the United Arab Emirates.

Not ones to stay away from the GAA for too long, both are now playing football for Abu Dhabi’s Na Fianna team.

How did you end up in Abu Dhabi?

We knew friends from college that had moved out to the UAE. They couldn’t recommend it highly enough. We travelled to Abu Dhabi and Dubai two years ago on holidays and favoured Abu Dhabi during that trip. There is a big Irish community out here and also I find it to be more laid back than Dubai, it doesn’t seem as hectic.

What’s the best thing about living in Abu Dhabi?

Obviously the weather is a big positive. Alongside the tax free salary and the really good social life at weekends. There is always something different to do. Abu Dhabi is a great location to travel from as it is very central.

At the moment we have decided not to travel home as we are using the opportunity to travel and see some of the world.

No as we have only been gone a short period of time, although there was a hurricane or two!

We’ve learned just how small Ireland really is, no matter where you go out here your bound to bump into people you know. We’re both playing football with the Abu Dhabi Na Fianna team and since joining we have met up with friends that we played with in college or on opposing teams at home.

Yes, there are many cultural differences all of which we were aware of before we moved out. Islam is the basis for the culture and society here in the UAE but it doesn’t have much of an affect on our day to day lives.

We hear the call to prayer five times a day which took some getting used to in the beginning but now we don’t even notice. Local women dress conservatively in the Hijab while local men wear the Kandora.

However, as a large portion of the population are Expats the city is very westernised and this eradicated a lot of the misconceptions people have about Abu Dhabi. The working week is Sunday through Thursday which also took some getting used to.

Yes, most of the stereotypes you hear in relation to the UAE don’t actually apply to Abu Dhabi and Dubai because they are so westernised although you do have to be respectful of their culture.

Two common misconceptions that you regularly hear are in relation to women having to cover up and alcohol not being available. However both are not true, women can dress however they want and we can go out and enjoy a night out the same way we do in Ireland.

Our family and friends. However with WhatsApp and Skype we’re able to stay in contact on a daily basis.

Of course our plan is to return, but for now we will enjoy the life we have over here.