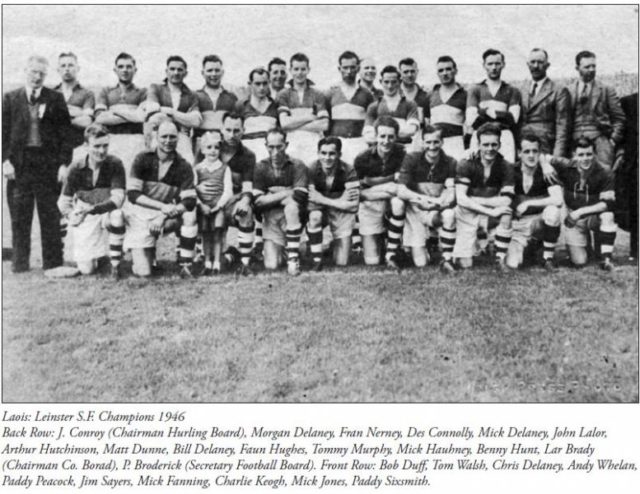 The last remaining link to the Laois team that won the Leinster senior football championship in 1946 has sadly passed away.

Mick Jones, originally from Ballyroan, was in his 98th year and died peacefully in the loving care of the staff of St. Luke’s Hospital, Kilkenny.

His death comes a couple of years after Annanough’s Mick Dunne and Portarlington’s Benny Hunt, two men who were also on that team, passed away.

Jones lined out at wing back in the victory in 1946 and also played in the 1947 decider against Meath which Laois lost.

The Laois seniors were considered outsiders at the start of the championship in 1946.

The margin was two points against Offaly at Tullamore on June, 2 Laois 1-7, Offaly 1-5.

While, on June 30 at Croke Park, Louth were beaten, again by two points, 1-9 to 0-10, with Stradbally’s Bill Delaney getting the vital goal.

Back in the Leinster final for the first time since 1943, great expectations surrounded the clash with old rivals Kildare.

Laois had a long list of injured players in the run up to the game and a postponement was sought but was refused by Leinster Council.

Despite the foreboding of doom, Bill Delaney played with his ribs strapped and it was one of Laois’s finest hours.

One man reigned supreme, Graiguecullen’s Tommy Murphy at centre half back turned in a display that was simply incredible.

He sent over eight points from centre half back from frees, was mainly responsible for a ninth and played a huge part in stemming an all out Kildare bid near the end in a 0-11 to 1-6 victory.

In the All Ireland semi-final Roscommon, champions in 1943 and 1944 were the opposition. Roscommon had the tonic of two first half goals to hang on to victory 3-5 to 2-6.

Incredibly, Laois would not taste Leinster success again until 2003.

“Predeceased by his daughter Bernie, his brothers Liam and Peadar and his sister Maureen (Leech). Deeply regretted by his loving wife Chris, beloved father to Jimmy, Michael, Tony, Breda, Mary and Imelda. Sadly missed by his sons in law, Walter, Ollie, Tom and Cemal (deceased).

“Reposing in his family home from 3pm until 8pm, Friday, with Prayers at 7pm. Requiem Mass celebrated in St. Andrew’s Church, Bagenalstown at 11am on Saturday, followed by burial in the Cemetery of the Assumption, Bagenalstown. Family flowers only. Donations if desired to St. Laserian’s House, Bagenalstown. Co. Carlow. Saturday morning house private please.”