Five Laois footballers have been named on the Irish Independent Division 4 team of the year – and one of them has been ranked as the best player in the country.

The placings are compiled from ratings in the match reports for all 112 League games.

They are the only newspaper to undertake the ratings game on such a detailed basis.

Every Monday during the League and championship, they carry a rating for each player and have now worked through all the figures for the season so far to come up with the top individuals, as well as selecting a team from each Division.

Laois have the highest representation of players on the Division 4 team and despite missing the final – Gary Walsh has attained the highest rating of any player in the country with 8.2.

It is somewhat surprising that Kingston has made the cut as he did not play in the first two wins over Limerick and Leitrim.

He was a substitute in the wins over Waterford and Wicklow before making his first start against London.

Kingston did start again against Carlow and then played a starring role against the same opposition in the final.

The Laois footballers are currently preparing for their Leinster first round match away to Wexford on May 12.

They will play Meath tomorrow night in a challenge match in Graiguecullen. 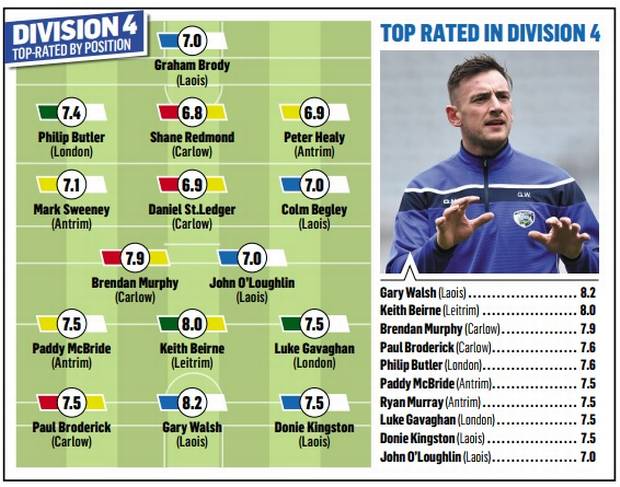